The beginning of the name Ruble

‘Grivna’ was the monetary unit used in ancient Russia. It was a silver or gold ingot weighing about a pound.

The name ‘ruble’ comes from the word ‘cut’ because a silver rod weighing 1 grivna was split into four parts. Some say that the ruble was never a part of the grivna but a synonym for it so the exact reason why the currency carries this name is not fully familiar.

The history of Russia Rubles

This currency goes back a while since it has been used since the 14th century. It is considered to be the world’s second oldest currency, right after the sterling pound. It had been used before the Russian empire was established. From 1917 to 1991, the Soviet ruble was the currency of the country. The Russian ruble was made at the end of 1991 and was used together with the Soviet ruble, which was used until the year 1993.

The ruble was the first currency in Europe that was decimalised. Then, one ruble became equal to 100 kopeks. 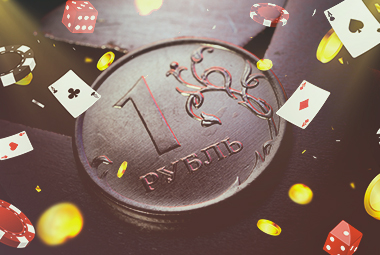 Here are some payment methods that are used in the gaming industry for making deposits and withdrawals in Russia Rubles. Each of them has its own advantages and disadvantages so it is up to the individual to choose which of these methods is suitable.

According to the law enforced in 2006, all gambling in Russia is prohibited. Land-based gambling is also very restricted, it is allowed solely in four areas. The government is very eager to prevent Russians from engaging in online gaming which is why internet service providers are forced to block certain sites. If they fail to do so, they may lose their license to operate.

There isn’t any licensing process related to online gaming anywhere in Russia. Even though it has been discussed and promised that the government will establish some kind of licensing system, it seems unlikely to happen in the near future.

Since there aren’t any regulations or laws related to licensing and online gaming, there is no player protection. This means that shady online casinos may take advantage of Russian players and the players would have no one to turn to.

Russia has invested a lot of time and energy into stopping its residents from gambling. There are blacklists, it blocks financial transactions and has designed a whole infrastructure with the purpose of repelling people from the gaming industry.

It seems that online casinos generally ignore the fact that gambling is prohibited in Russia and they accept Russian players as well as their currency. There are some casinos which offer live dealer games and payment methods that accept the Russian currency any player can find them through simple research.

Pros and cons of using RUB at online casinos

There are plenty of casinos that accept this currency and provide a number of payment options so it can be used in gaming. What could be the issue is the location of the player as certain casinos do not allow players from countries where gaming is illegal to join. There are penalties for using proxies and the like. If you are a gamer that wants to play in Russia rubles and you are outside of Russia, you will be able to play without any issues but, if you are a resident of Russia, it will be more difficult to find a casino that will allow you to play.