While 75 Ball Bingo is the bingo version found mostly in the United States, and 90 Ball Bingo is widely popular across Europe and the United Kingdom, 60 Ball Bingo is gaining traction thanks to Tombola and other online bingo providers. In fact, of all the bingo variations out there, 60-ball games are the least represented by game developers. What is 60-ball bingo and how do you play? Let’s take a closer look.

Tombola rolled out exclusive games including Bingo 60 (2012) and Blocks (2018). Playtech also launched a live version in 2020 known as Deal or No Deal The Big Draw Live. 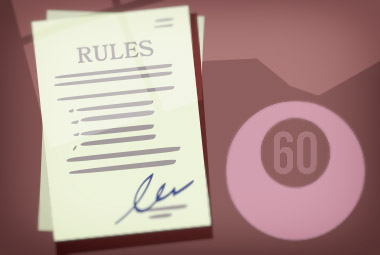 The goal is to cross off these numbers first, after which you will win the corresponding ticker color prize.

While the tickets are dropped out of the game as the prizes are won, the players still have a chance to win with their remaining tickets!

Play Blocks 60-Ball Bingo Vs. Deal or No Deal The Big Draw Live

Game developers often try to innovate and improve on the casino game versatility, which has also started to be the case with this bingo variation.

This version of bingo combines a gems/blocks game with bingo, and it is played on a 6x6 grid with 36 variously colored blocks. Each color comes with six numbers. To win the “full house,” players need to clear six numbers of the same color, while if the house is called on up to 10 calls, you can grab a Jackpot prize!

But, here’s the kicker!

Each player is assigned a score before the numbers begin to be called. When two or more blocks of the same color are touching, points are awarded, while the blocks explode, and the remaining blocks move down the grid as the numbers are called, creating more touching colors and adding more points to a player's score.

Deal or No Deal The Big Draw Live

This is a live version based on the popular TV show and played with a presenter! It's a 60-ball game with a couple of twists.

Enter the live lobby and purchase a ticket for the next game, after which you will be offered to boost the prizes on selected cases. The game's goal is to cross off the numbers on 15 cases of your bingo card, while every case represents a cash prize.

Once a player crosses off a minimum of 7 cases, they will unlock The Banker's offer and be offered the chance to take a cash prize and end the game.

Once the first 20 calls have been completed, they will be offered Deal Or No Deal. The player can opt for the deal, reject it, take the prize, or keep playing and boost their prize!

Moreover, after the first 20 calls, all players will be presented with a chance to buy another five calls, making this game a bit like Slingo since players need to wager more to keep playing.

play
Load More Load All There are 0 games remaining

We noticed that you just claimed a bonus from Tombola?