Bingo and Astrology - Are My Lucky Numbers Written in the Stars?

What’s the connection between online bingo and astrology?✔️ What are the lucky numbers for bingo by horoscope signs today and where to find them? 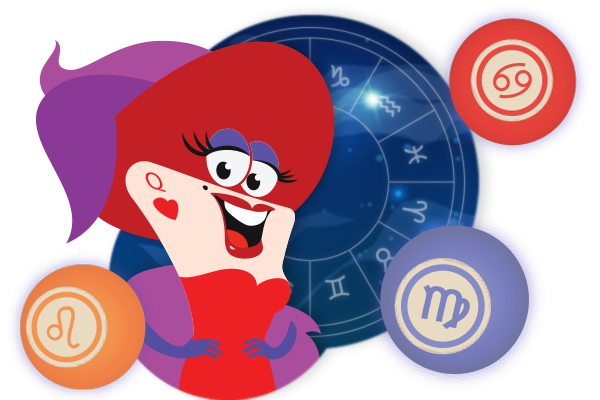 Ever since the first games of luck were born, people have been looking for ways to increase the odds of winning, regardless of the genre. Even though some of these rituals may seem like superstition and relicts of the earlier times, things haven’t changed a bit with the introduction of online bingo.

Focusing on the bingo in our specific case, players believe in personal lucky numbers, good luck dabbers, the time of day when a game is played, and many other factors (allegedly) influencing the outcome of the game. On top of that, we also have astrology, which, as believed by hardcore fans, has a huge impact on the final result.

So, is it all written in the stars? Can astrology help us maximize winning chances? Are some horoscope signs unluckier than others? Let’s explore this topic!

Connection Between Bingo and Astrology

Though it is hard to give a precise definition of the real purpose of horoscopes, some say that their role is to offset the uncertainty of daily life. Even a couple of familiar facts are often enough to help people gain better control of their lives, and have more self-confidence. That’s why horoscopes are still a thing  and chances are their popularity will never fade.

Bingo fans seem to understand that connection deeply, which is why some of them came up with a brilliant idea. Is there a better way to increase one’s chances to win based on his/her own astrological chart?

That’s right, it’s a tailored game at its finest!

Some operators offer the possibility to select a bingo card generated from a person’s natal horoscope. So, whatever goes wrong in that case - simply blame it on the stars. In case of a favorable outcome – be sure to say "thanks" to the universe.

What’s with the Lucky and Unlucky Numbers?

Is it the date of our birth or the number of the house we live in? Perhaps a day we passed the final exam or the one we got married? Talking about the horoscope for lucky numbers, there are plenty of options we can choose from. Only, some numbers are luckiest than the others while the others have the reputation of being cursed.

On top of that, there are more than one million number combinations in a game of bingo. This means that finding the luckiest one (or ones) is not the simplest task in the world. But, it’s worth trying.

Are you curious to find your bingo lucky numbers today? Perhaps your bingo session is taking place the next day, so you’d like to discover bingo horoscope lucky numbers for tomorrow, wouldn’t you?

Gemini lucky numbers for today, lucky bingo numbers for Virgo or any other zodiac sign differ not only on a monthly but on daily basis as well. So, the best way to find specifics on the relation between daily horoscope and lucky numbers is to explore the dedicated forums where people share those data regularly. That’s the place where you can find not only the Libra bingo horoscope but details on all other zodiac signs as well.

As you all know, China has its own horoscope, where signs are attributed to specific years, instead of months. Interestingly, the luckiness or unluckiness of the specific number is defined based on pronunciation.

For example, the number 8 holds huge significance as a lucky number as it is associated with the word whose meaning is related to wealth. To a lesser extent 2, 6, and 9 are also classified as lucky. 4 is the unluckiest one, as its pronunciation is the same as of the word which means “death”.

(Interestingly, four seems to be lucky for some signs, after all.)

(Similarly to the abovementioned situation, eight ended up as unlucky for some signs, after all.)

What are Zodiac Signs Most Scared of?

Generally speaking, we can say that ALL people, regardless of the zodiac sign, are afraid of losing. Only some of them are afraid of that slightly more than others.

Exploring a bit, we encountered a list of most common fears by signs, so we shall share a couple of those with you. Those that can be related to bingo, of course.

To start with, Aries are afraid of admitting defeat, so if you have a friend who hasn’t had much luck while playing bingo, don’t ask him/her too much about it. Taurus is afraid of being poor, while Gemini is not happy without a strong WiFi connection.

Then Cancer is afraid of the unknown, while Leo is not comfortable with underperforming. Virgo doesn't like being unprepared, while Libra doesn’t like making the wrong decision. Scorpio hates cheating, while Sagittarius is afraid of not getting attention.

Furthermore, Capricorn is not thrilled with the lack of accolades, while Aquarius is afraid of breaking a laptop. Finally, Pisces are afraid of actually playing bingo.

On top of that, there’s an interesting analysis on which signs are the most competitive - Capricorn takes the highest position. All there’s left is to use imagination and see how these “fears” can be implemented in this game with lengthy tradition.

When bingo appeared in Germany hundreds of years ago, key decision-makers in the education sector defined it as an excellent educational tool for improving mathematical capabilities. Research in Chicago showed that the minds of people playing this game were sharper.

Even after discussing the connection between horoscope lucky numbers, it’s still hard to find the right and most precise formula for success. This dedicated space will try to give as many possible answers through various themed articles on zodiac bingo, horoscopes with lucky numbers, and much more.

Aside from relying on the lucky bingo horoscopes, make sure you invest some time in selecting a good and trustworthy online bingo rooms. Our directory has plenty of excellent suggestions for you, so apply the filters to narrow down the search and see which options are offered.

How to attract good luck

Is today my lucky day at bingo?

Check your bingo horoscope to add a bit of fun into your session. It’s important to select a reputable bingo room to play in as well.

What are the lucky bingo numbers based on your zodiac sign?

What are the lucky numbers for bingo in the Chinese horoscope?

Generally speaking, number eight is considered the luckiest one while eight has a negative reputation. However, the numbers differ a lot based on the specific zodiac sign.

Can you predict which numbers will come next in bingo?

If a game is fair, both in offline and online variants, there’s no way to predict which numbers will appear next. That unpredictability is one of the most exciting things not only about bingo but other games of luck in general. Technically speaking, a random number generator (RNG) is used to ensure randomness of each number called.