40 ball Bingo is the latest inspiration of Virtue Fusion themed after the Rainbow Riches Slot with Jackpots, Coins, Bonuses and cash prizes in this unique version.

The traditional games of 75 and 90 ball bingo that have captured the hearts of a legion players. The online Bingo market expands with contemporary variations that are keepers among a heightened international audience. Virtue Fusion designs a new game that bingo and Slot lovers are destined to appreciate. 40 Ball Bingo made its online debut in March 2015. The success of Virtue Fusion software focuses on Bingo as it delivers a wide range of games to brands under this extraordinary umbrella.

Take a bingo game add the elements of a popular Slot and the perfect recipe. Also referred to as Rainbow Riches Bingo this variation is played with 40 standard balls and here is the unique twist it also includes 2 Rainbow Riches Clovers. It takes players to a whole new level of entertainment with amazing graphics, special features and bonuses. 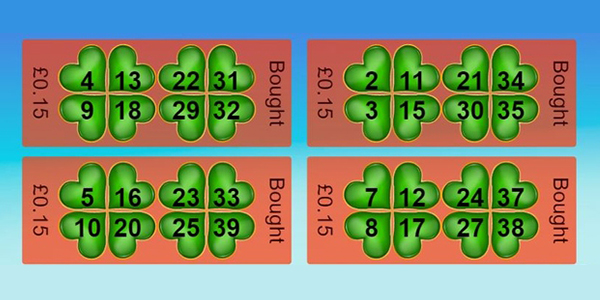 The two four leaved clovers replace any traditional ticket you may be accustomed to in this 40 Bingo variant that is really in a special class all its own. There are a total of 8 spaces to cover with colorful graphics that will change from green to gold as numbers are daubed.

40 Ball Bingo Pattern: How to Play 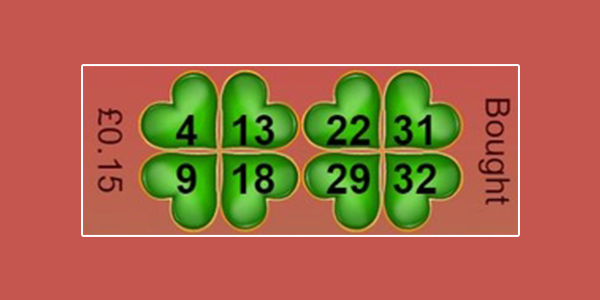 Depending on which game is in play you will have to daub off all the numbers on one or both of the clover tickets. The player who is the first to cover all the numbers wins a cash prize.

Players pick their own lucky number. Every time that number is called it is one step closer to the Rainbow Riches Community Jackpot plus you’ll earn one coin to get closer to the Bonus prize.

One of the thrilling highlights are the two Jackpots that are up for grabs.

Rainbow Road Progressive Jackpot – It wouldn’t be an Irish themed game without a Leprechaun. There are two ways to trigger the Jackpot by either landing or passing it on the Rainbow trail. The Bronze Pot is triggered on the 10th step, Silver Pot on step 25 and the Gold Pot on step 50. Everyone is the winner of this Jackpot because 50% is shared between the community and the remainder rolls into the next pot.

Wishing Well Jackpot – Make a wish you pick the right number to win this personal Jackpot. If your number is called, you’ll receive a gold coin. Once a you have collected 40 coins get a Bonus reward.

Times they are a changing and the fresh approach to bingo variations that are reinvented yet keep the basic fundamentals of the game are attracting a new generation of players. 40 Ball Bingo captures the popularity of Rainbow Riches Slot without losing the basic elements of Bingo.

We noticed that you just claimed a bonus from William Hill Bingo?

We noticed that you just claimed a bonus from William Hill Bingo?

We noticed that you just claimed a bonus from Bucky Bingo?

We noticed that you just claimed a bonus from Betfred Bingo?