Deal or No Deal 90 Ball Bingo 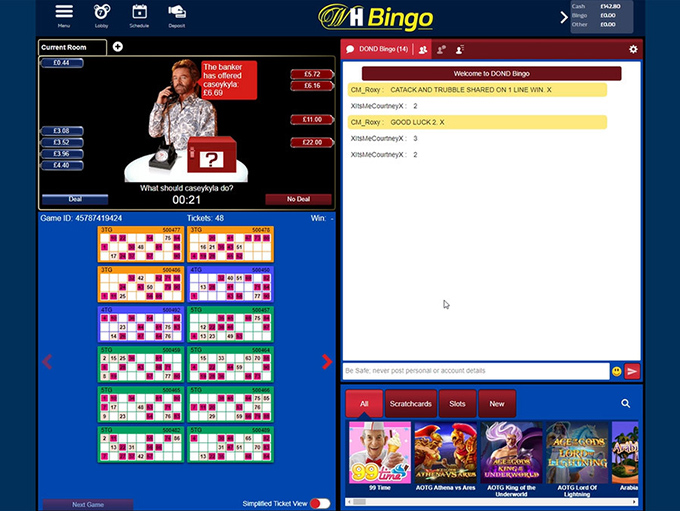 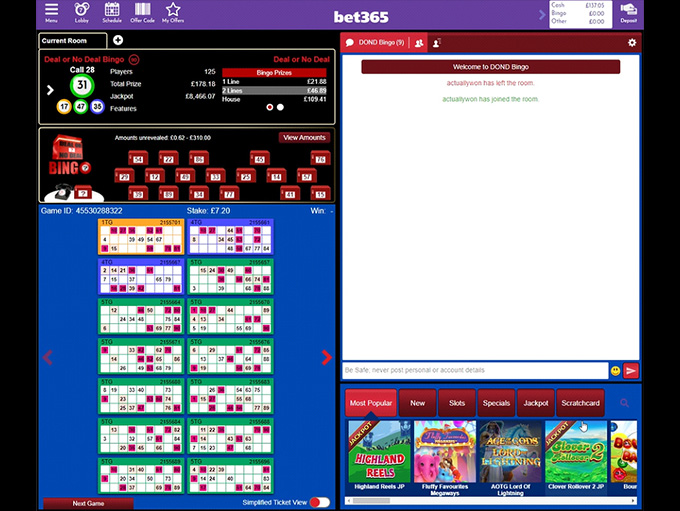 Deal or No Deal 90 Ball Bingo

Relive the excitement of the classic tv gameshow hosted by Noel Edmonds in Playtech’s Deal or No Deal 90 Ball bingo. Not only will you find three chances to win per game but a bonus game feature where taking on the banker results in extra cash. Do you go with your gut instinct and open your box or take what the banker offers you? A little help from the bingo audience may help make that decision a little easier, so keep your eyes peeled for the community vote outcome. You’ll need to be quick though, as you only have a limited time to make up your mind in Deal or No Deal 90 Ball bingo.

How to Play Deal or No Deal 90 Ball Bingo

Just like a traditional game of 90-ball bingo, the aim of the game is to match 1-line, 2-lines or a full house before anyone else. Each ticket houses 3 rows with 15 numbers; five numbers on each row. The first prize is for the one-line and is the smallest of prices. Two-line prizes increase slightly but the largest of prizes is that full house of 15 numbers. If more than one person wins a full house, the prize will be split equally between the winners.

Ticket prices fluctuate with off-peak times offering the greatest value for money, ticket-wise. That being said, the fewer players dabbing those tickets and the cheaper the tickets, the smaller the prize fund. Busy periods cater for more players, a slight increase in ticket price and substantially larger prizes, which statistically speaking means you’re less likely to win.

Buying tickets is as simple as selecting 6, 12, 24 or max (36) on the bingo panel. Use the adjuster bar to select your own predefined number of tickets. Hen you’re happy with the number of tickets, press to buy. Your tickets will then be secured for the next game.

Special Features of Deal or No Deal 90 Ball Bingo

Take on the Banker: Just like the hit television gameshow, the bingo room is home to 20 identical sealed boxes. As numbers are drawn and called by Noel Edmonds, boxes will be eliminated with their value removed from gameplay. This will continue until the full house is won where there are just 2 boxes remaining. The popular gameshow host will appear on the screen with a telephone offer from the mysterious banker. The full house winner will be faced with a choice – take the banker’s offer or open their box. Whatever they decide to do, extra cash is guaranteed. The bingo community cast votes on what they think the winner should do.