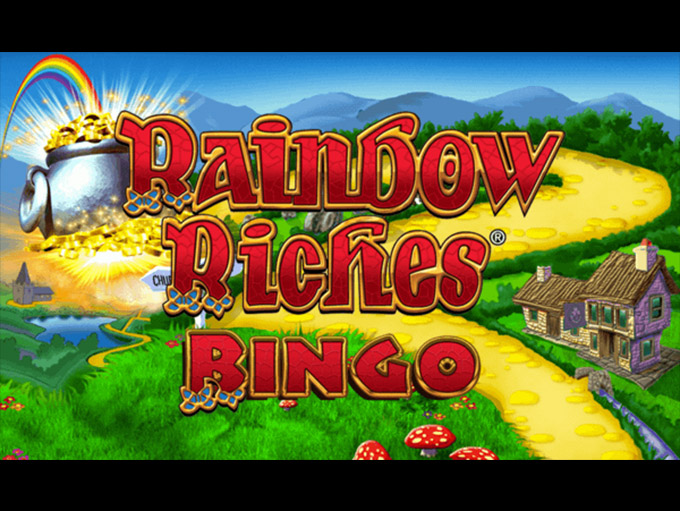 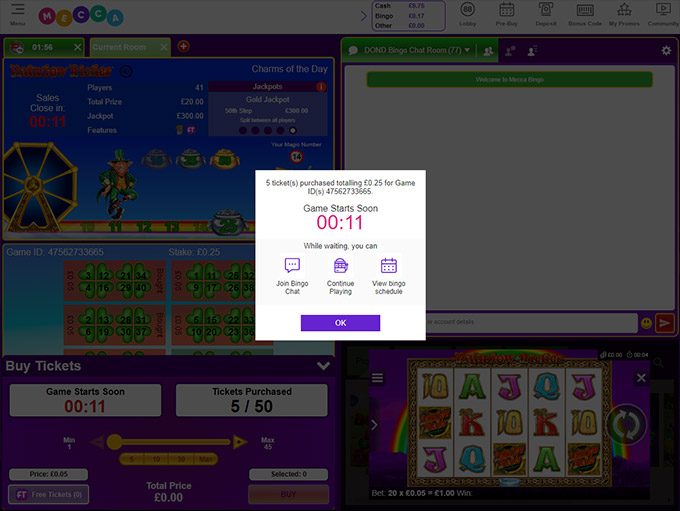 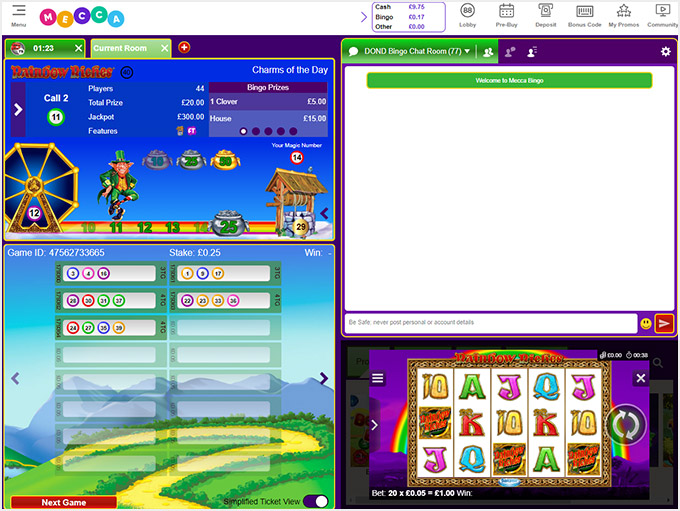 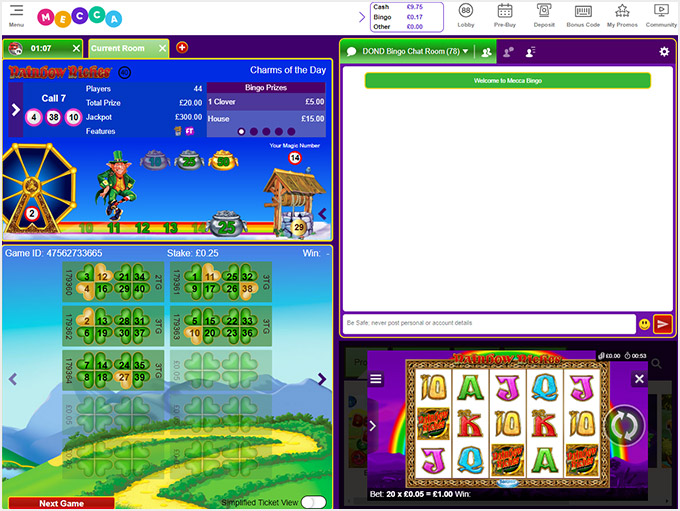 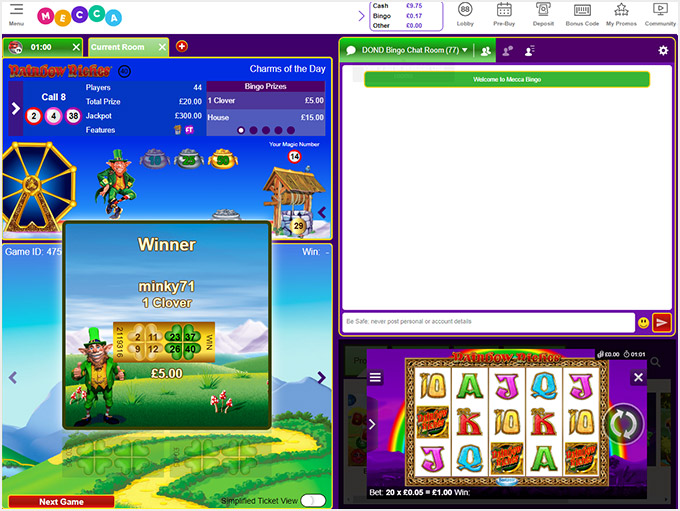 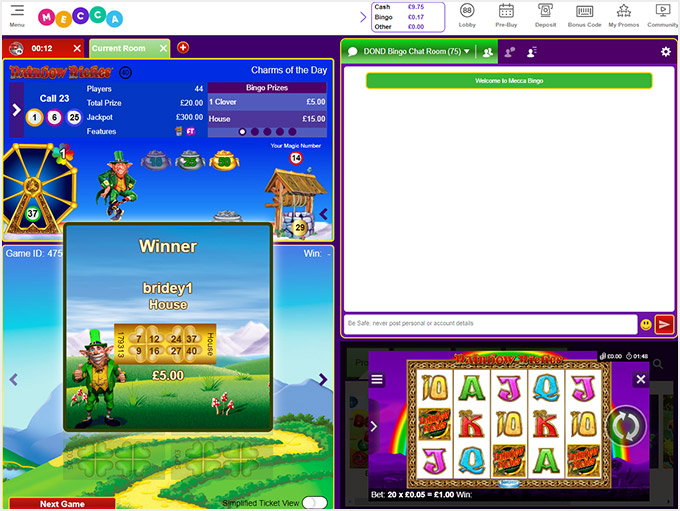 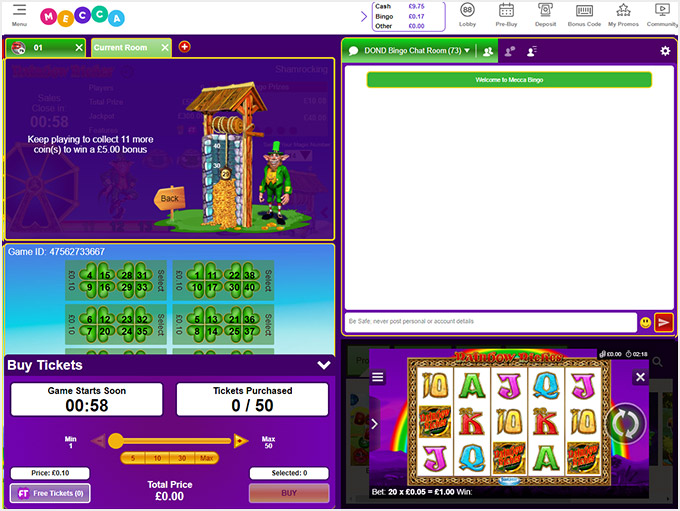 Since 2009, Barcrest’s Rainbow Riches video slot has been popular both online and offline with its iconic Road to Riches, Pots of Gold and Wishing Well bonuses. Larry o’ Leary, the cheeky leprechaun dressed in green attire from head to toe, went on to become the star of many a Rainbow Riches slots, but it wasn’t long before he was to star in his very own online bingo game!

Rainbow Riches Bingo from Playtech merges bingo with iconic features from the world-renowned slot franchise to deliver 24/7 fun. The special 40-ball bingo game features four-leaf clovers instead of bingo tickets, a trio of jackpots that many of you will recognise from the slot game of the same name, a wishing well bonus with a guaranteed prize and the chance to win two prizes in every game. Playable from 1p a ticket, games are designed to be fast with just four numbers needed for a prize. Will you find luck at the end of your rainbow?

How Do You Play Rainbow Riches Bingo?

Rainbow Riches Bingo has tickets that can be viewed in simplified mode (3TG, 2TG, 1TG view) or in standard mode (the clovers). Each shamrock-themed ‘ticket’ is made up of eight numbers which are then split across two four-leaf clovers. Minimum ticket rules is just 1 per game however, in order to take part in the wishing well bonus a minimum of 5 tickets is required.

How Do You Win the Rainbow Riches Bingo Jackpots?

Larry o’ Leary’s job is to produce the numbers and he does this by spinning the wooden wheel, only that wheel also has the ability to spin in rainbow clovers and it is these that go on to trigger the jackpots.

The Rainbow Road progressive jackpot is a community jackpot with three different prizes within it: Bronze, Silver and Gold. One rainbow clover = 1 step along the path, 2 rainbow clovers = 2 steps and so-on. The jackpots are triggered when the leprechaun lands on, or passes, the jackpot on the rainbow road. Bronze is 10 steps; silver is 25 steps and gold is 50 steps.

Any Other Special Features?

Rainbow Riches Bingo gives each player their very own wishing well and along with it, the chance to win a bonus prize. As you enter the room you will be asked to choose a lucky golden coin number. When you have gathered forty lucky golden coins, the well will spill out a bonus into your bingo account. Numbers can be changed but by doings so, any coins gathered up until the change will be lost.

Other features may include 1TG/2TG prize pots, roll on (to produce more winners) and guaranteed prizes. Check the bingo schedule with the online bingo operator for the latest bingo offers.