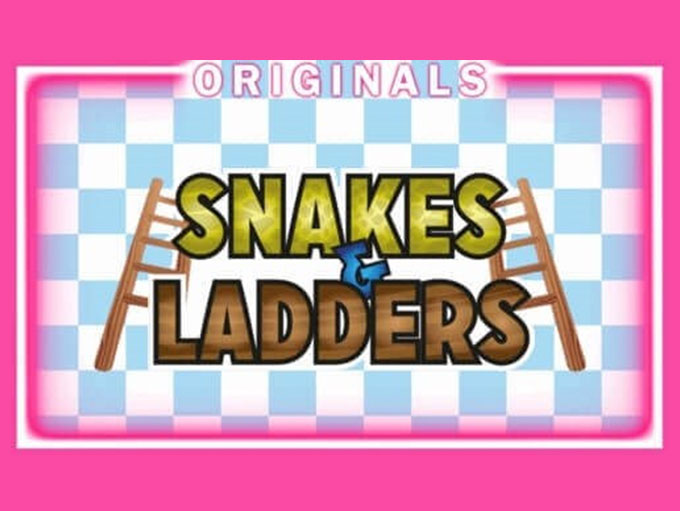 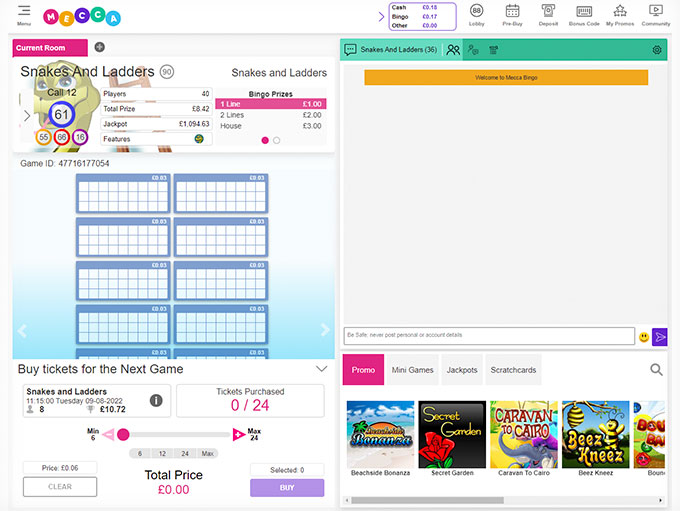 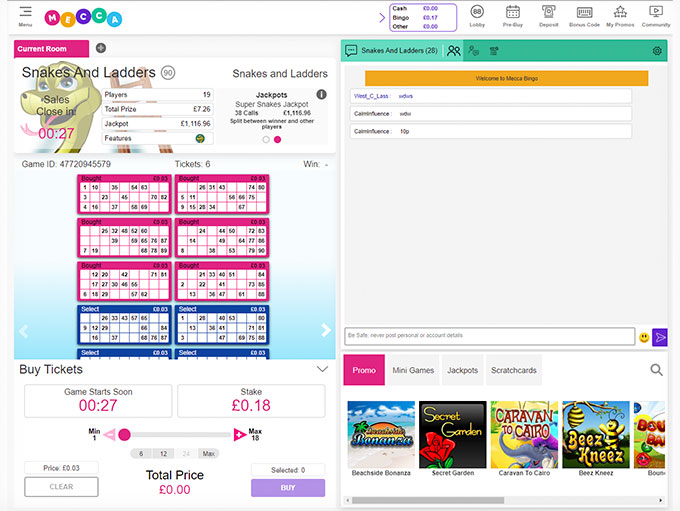 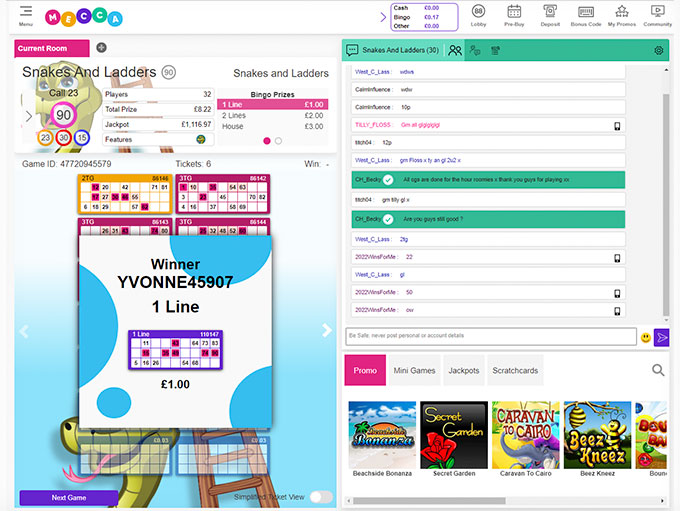 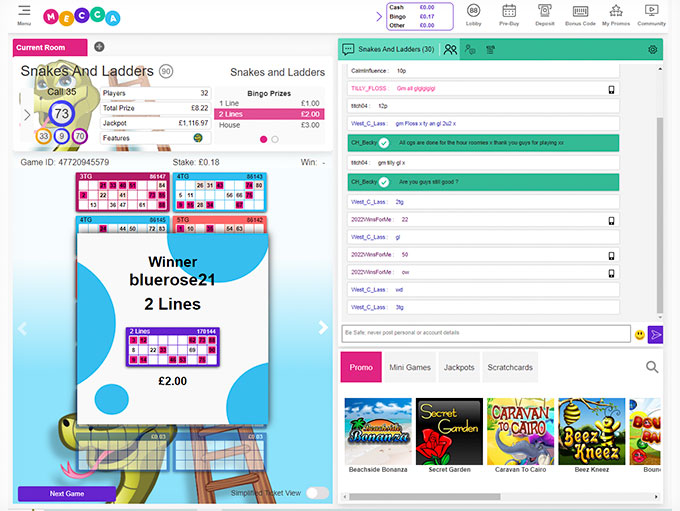 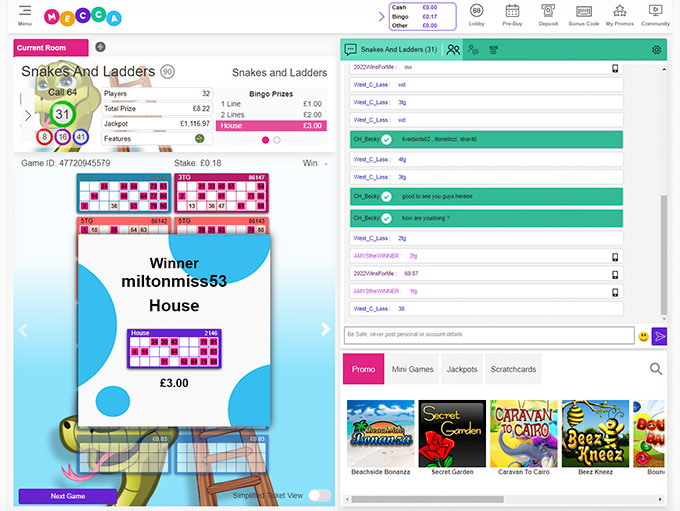 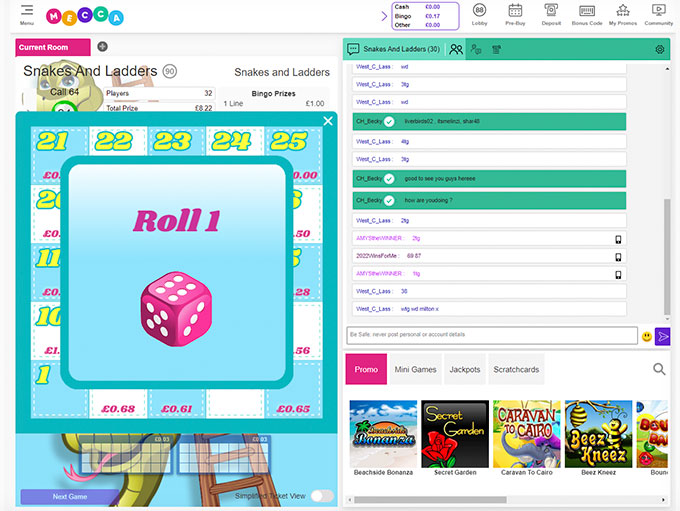 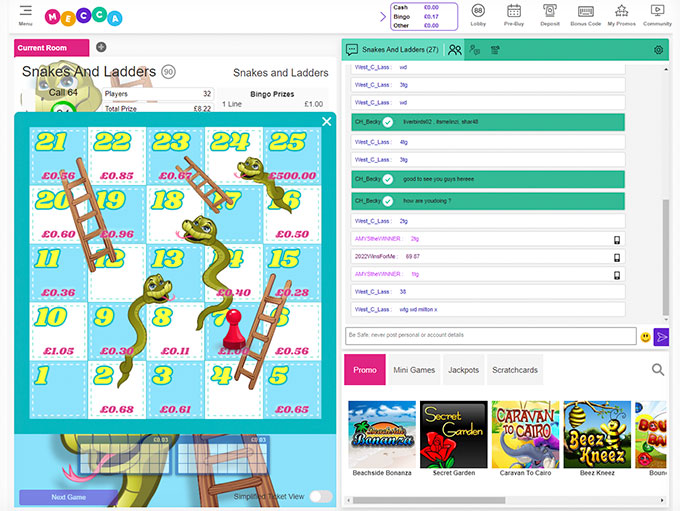 Snakes and Ladders Bingo by Playtech is the perfect pairing with all the fun of a traditional 90-ball bingo game and an exciting board game bonus round for increased thrills (and wins!).

It’s not the first time we’ve seen classic board games being merged into online games, take Monopoly for example, Evolution came up with a crazy and ingenious idea to create a Monopoly themed live casino gameshow. Thanks to augmented 3D reality, players can take a trip around the iconic board game to win big prizes via rolls of a dice!

In similar style, only without the live cameras and a giant gameshow wheel, Snakes and Ladders also offers the chances to relive a much-loved board game to win prizes of up to £500 on top of any bingo winnings you may have or may not have won. Every game there are three chances to win with tickets starting as low as 3p each and it’s not only the full house winner that gets a stab at big cash prizes, even those who don’t win do too!

How Do You Play Snakes and Ladders Bingo?

Snakes and Ladders Bingo is a typical 90-ball bingo game with one-line, two lines and a full house prize in every game. The room is open between 10am and 1am with a minimum ticket purchase requirement of 6. This means players must purchase a minimum of 6 tickets to play.

Use the pre-set value buttons or the ticket slider to secure your tickets. Don’t forget to confirm or you won’t be playing! You have the option to chat, take part in chat games and/or play mini games before, during and after the bingo games. A wide selection of casino games can be accessed in the bingo room, including Eyecon’s Fluffy Favourites and Beat the Bobbies at the Tower of London.

When ticket sales close, the game will begin with 18-seconds. The first prize is for the line followed by two lines and that full house. Winnings will be credited to your real money bankroll immediately after the game has concluded.

How Do You Play the Snakes and Ladders Bingo Bonus Game?

When the full house is won, anyone waiting on 1TG will be granted access to the Snakes and Ladders board game where there are prizes scattered all over the place. Players who did not qualify can sit back and watch the game unfold on their screens.

The dice will automatically roll three times, the counter will move to positions on the board based on the throws. Land on a snake and it’s down you go. Land on a ladder to be lifted higher. A top prize of £500 is featured – will you be lucky enough to win it? Everyone who qualifies for the game receives the same prize. The value of that prize is determined by the position of the counter.