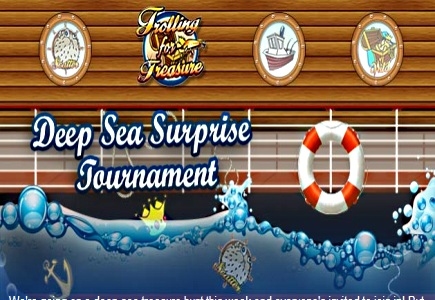 Whether you are a treasure hunter or simply captivated by the sea, Bingo Hall invites all up and coming explorers like Jacque Cousteau for a Deep Sea Tournament. It is a hunter's delight as players spin their way to fantastic prizes in the Trolling for Treasure Slot Tourney.

Trolling for Treasures is a 5 reel, 9 payline Slot with coin values ranging from .05 to $1.00. Features include a Bonus Game, Scatter symbols and Wild symbol. The theme is all the treasure you would find in the sea including fish, sharks, anchors, sea turtles, gold, treasure chests and even an old boot that has been thrown overboard!

There are three fabulous prizes including:

· 1st Prize – A HP Notebook for the player who wins the most games.

· 2nd Prize – A HC Smartphone for the most spins.

Play now and until August 26th for a chance to win a fine treasure pulled up from the depths of the deep blue sea. Winners will be announced on the Bingo Hall Blog on Monday August 27th and the bonus credited to winners account on the same day. The winners of the first and second prize must confirm their addresses and send an email to the promotions department. Prizes will be delivered in 5-10 business days.
Bingo Games Bingo Promotions & Bonuses Back to articles

"Nowhere else gives away prizes..."