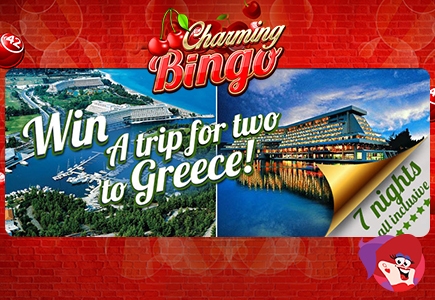 There are just a couple more days left to qualify for a trip to Greece at Charming Bingo! Take advantage of an opportunity to escape the cold weather, and lounge under the sun on a beautiful, Greek island. It’s easy as pie to qualify. Simply play your favorite bingo games, and for every £10 wagered, one prize draw entry will be awarded. So, the more you play, the better the chances you will have of scoring this amazing getaway!

If you’re lucky enough to win, the grand prize is a 7 night all-inclusive stay at the 5-star, Porto Carras Grand resort, located in the second-largest city in Greece. The resort is home to a number of amenities, including a spa, golf club, casino, and marina. Additionally, the winner will have access to endless views of the slopes of Mount Melitan, along with beautiful, white-sand beaches. Transportation will be taken care of, along with the cost of airfare. There are just a couple of days left to qualify, with the draw scheduled to be held on New Year’s Eve, December 31st. The winner will be announced on January 10th!

Players may also continue to benefit during the final week of the site’s Christmas GIVEAWAY. The promotional event is currently in its fourth week, which will officially come to an end on December 31st. Entries may be collected for every £20 wagered on the following games: Very Merry Christmas, Xmas Cash, and Sugar Train Xmas. Winners of this final round will be announced Monday, January 2nd.
Bingo Promotions & Bonuses Back to articles