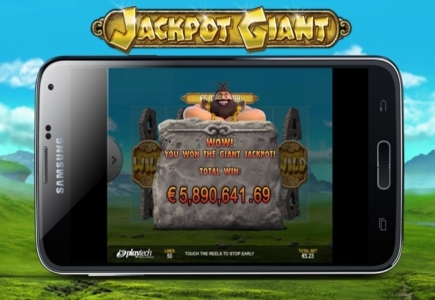 A new record has been set for Playtech as one UK player raised the bar with a mobile win of a €5.89 million progressive jackpot on the Jackpot Giant Slot at Gala Bingo.

The player's identity remains anonymous but her win has set the UK record for the largest mobile jackpot win in Playtech history. In general, it's the second largest progressive Slot win on a Playtech game coming in just under the £6.2 million progressive win on Beach Life in 2012.

We do know that the player is a librarian from Glasgow, Scotland who has been a Gala Bingo player for 3 years both at her local club and online.

She was spinning via her Android Galaxy S5 at £4 per spin, which made her an instant millionaire.

“I picked up my mobile and started playing while I was watching TV,” she said. “Minutes later I saw a huge string of numbers coming up and realised I'd hit the jackpot. I was simply blown away and couldn't believe I'd won. It's still sinking in and my family and I are still in a complete state of shock.”

Alison Digges, brand director at Gala Coral Interactive, said, “This is our biggest ever jackpot win on Gala Bingo by far and we're delighted one of our many loyal players has claimed the prize. Jackpot Giant is one of our most popular progressive games and we can't wait for yet more winners.”