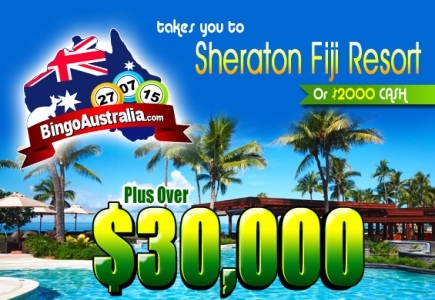 Players who enter the October monthly bingo contest organized by BingoAustralia stand a chance at winning a trip to Fiji or $2,000 in cash, the company announced this week.

Specifying the details of the contest, Bingo Australia also said that the special FIJI contest patterns can be found between 8pm and 11pm in the Purple Room, and that by playing there, punters may win entries to the Grand Prize draw.

In addition, entries can be won in weekly pokies tournament, as well. Playing any of the Parlay pokies machines during any week in October will see the top 10 players earn weekly cash prizes as well as additional entries for the Grand Prize Draw, which will send the lucky winner Fiji for seven nights.