A Round-Up of What’s New This Week 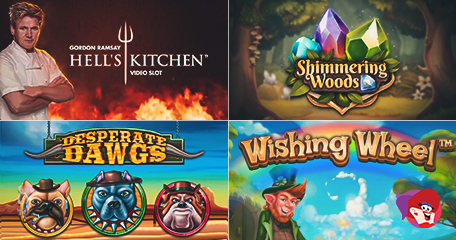 From Tasty Dishes to Shimmering Gems

There’s plenty to tell you about when it comes to new releases, but unless you plan on living in your seat for the next month, I’ll keep it brief. Of all the new gaming releases I’ve come across online this week, only four have stood out - Gordon Ramsay Hell’s Kitchen, The Shimmering Woods, Desperate Dawgs and Wishing Wheel.

International TV personality and award-winning chef Gordon Ramsay is back to dish up some home-truths, only this time he’s bringing his venomous tongue to the online slots communities. Styled on the competitive culinary show of the same name, you have a blue team and a red team battling it out to become victorious. Then, in the middle there’s you. You must choose a side if you’re to stand any chance of impressing the diners (and Gordon himself!) but choose wisely!

Powered by NetEnt, we first learned of this release a whole year ago so you could say it’s been a long-time coming. Loaded with gourmet dishes, catchphrases from the main man himself and thrilling bonus elements, this is one 5-reel slot designed to get your creative juices flowing.

Then There Were Three

The Shimmering Woods is a Play’N Go concept featuring a dazzling array of gem-themed symbols, all of which can split to increase the grid’s number of pay ways. We’ve seen a similar mechanic from Yggdrasil with their hyper-realistic and futuristic title Neon Rush Splitz, only this one delivers as many as 7,776 ways to win per spin. Other bonuses include free games where multiple symbol splits and re-triggers can take place throughout and a whopping great jackpot!

Talking of Yggdrasil, Desperate Dawgs is their latest invention thanks to a collaboration with Reflex Gaming. Don’t be fooled by the title – this is in no way shape or form a slot machine about dogs (unfortunately!). Set in Dodge City, Kansas, a group of bandits are up to no good with aims of raiding every bank and liquor store in the Wild West styled area. Pick and click bonuses, a crime multiplier spree and a bank heist are all up for the taking.

Wishing Well is the vibrant new release by iSoftBet, the folks who brought you Aztec Gold: Extra Gold Megaways. Your adventure takes you to the land of the four-leaf clovers and pots of gold at the end of the rainbow, but whether you win one or not is another matter. Randomly on any spin, the leprechaun can leap from his position at the top of the reels to award a spin of the mega wheel where bonuses include:

Which one would you play first? All these new releases can be found over at the home of no wagering – Play OJO Bingo.