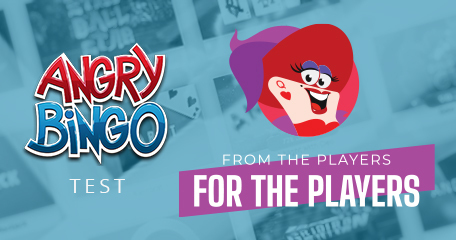 The message that waits to welcome new players is “Welcome to Angry Bingo, the hot-headed site that’s all about bargain bingo and mighty jackpots!”, but how true is that statement? We intended to find out. Further claims of low-cost bingo games, real cash prizes, exclusive rooms and explosive treats really got us thinking – do Angry Bingo really offer what they say they do? We decided to put them to the test as part of our on-going From the Players For the Players experiment, and here’s what we found!

With our reviewer being new to Angry Bingo, registration was required. The sign-up process was straight-forward and took just minutes. One thing our tester of the day noted was that in order to complete registration, verification of an active mobile was required. A text message was sent to her mobile phone with a 4-digit code, which was needed to activate her account.

Once logged in, the current offers and promotions appeared on screen. Placed between the welcome offer and prize opportunity alerts was a message stating players must verify ownership of any payment cards added to the account.

The link supplied in that message led to a more detailed website relating to “Strong Customer Authentication (SCA)”, but did our reviewer have to add these details? Find out in the next section!

Once the SCA message was read (and nowhere near understood), WinandBeeHappy returned to Angry Bingo to make her deposit. The first step was to add her card or choose PayPal, she opted for Visa Debit. Pre-set deposit amounts make for quicker transactions however £150 was not an option so this resulted in having to manually insert £150 into the ‘other amount’ box. After clicking ‘no bonuses’ to eliminate wagering requirements, a pop-up appeared related to new deposit regulations.

Again, no info was requested nor supplied. Once WinandBeeHappy confirmed her deposit amount, a new message appeared stating her deposit was a success. 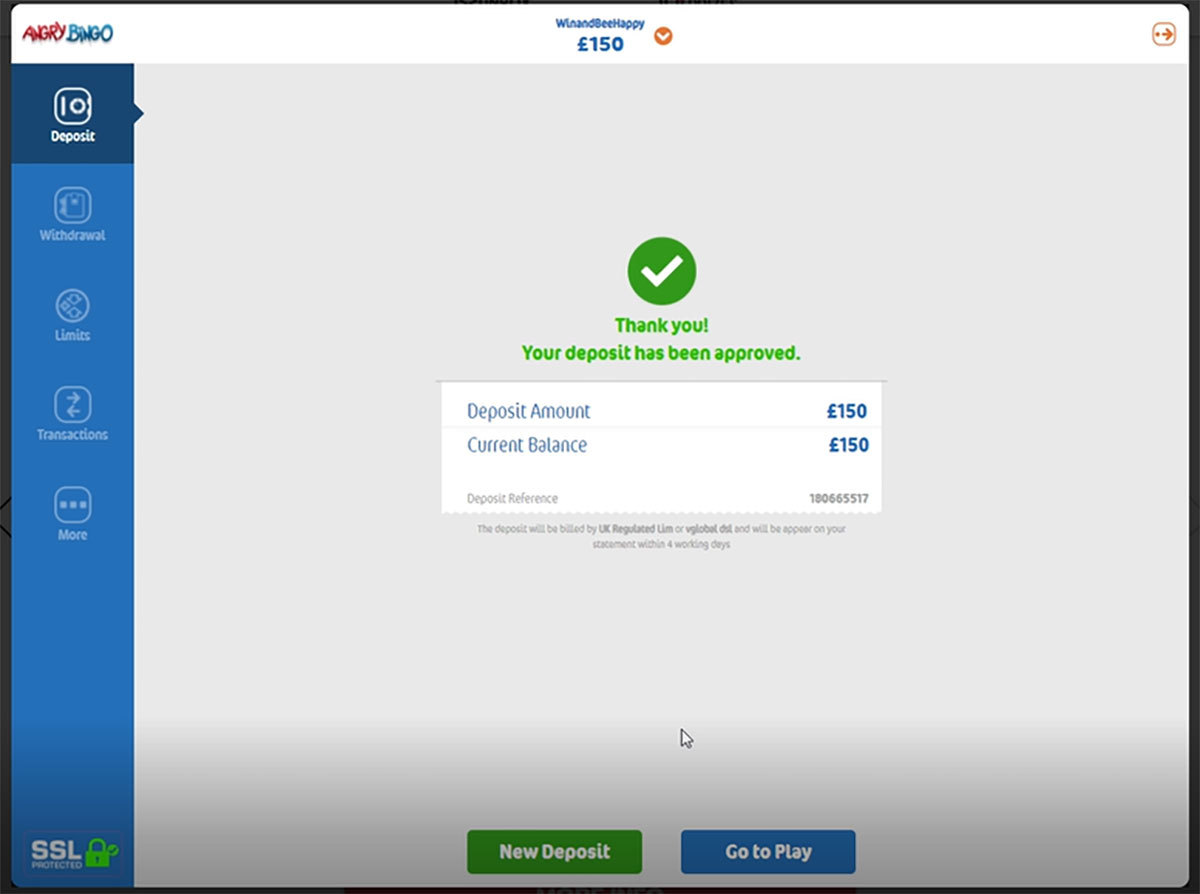 The main lobby is designed beautifully with categories housing a plethora of games with quick links to new games, bingo, daily jackpots, personal offers and the exclusive bingo shop. Every wager made on Angry Bingo accumulates points and these points can then be exchanged for items in the shop. Free games, bingo tickets, real money, bingo bonuses, games bonuses, NetEnt spins, new releases and even a sales section provide endless entertainment opportunities. 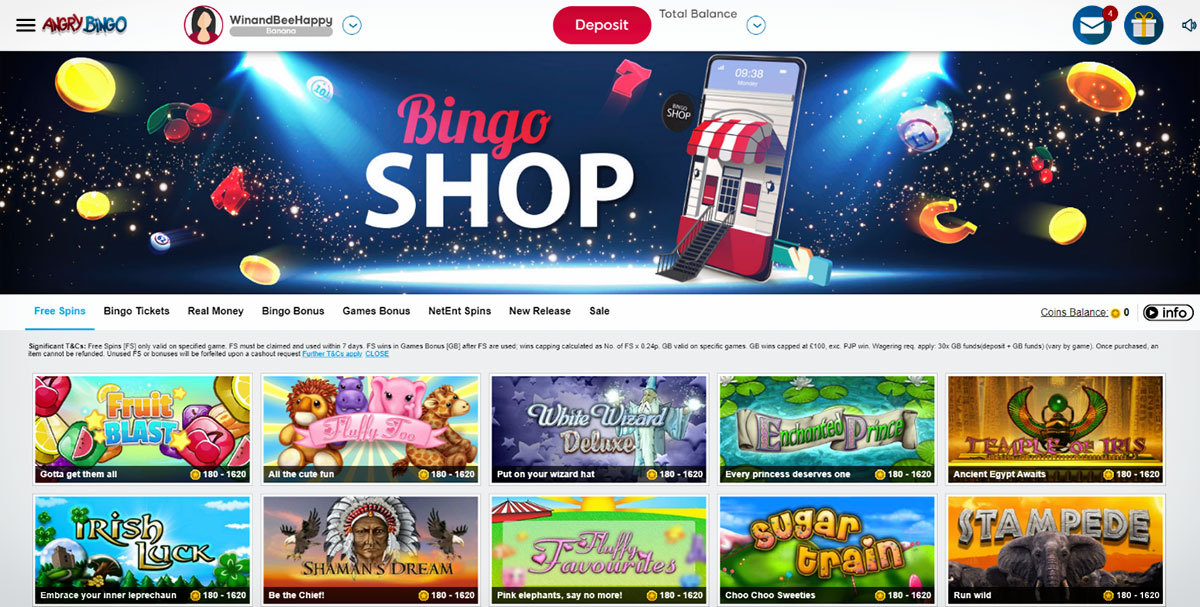 The bingo lobby lists details for each room such as ticket cost, the prizes and jackpots available in that room as well as the number of players and time until the next game. Popular bingo options include:

Our tester of the day tried every room that was available to her and noted all were bright, easy to navigate, offered side games from Eyecon and PariPlay plus a chat community. Of all the rooms, the Mystery Jackpots was her favourite because the full house prize (of up to £500), was only revealed after ticket sales closed! 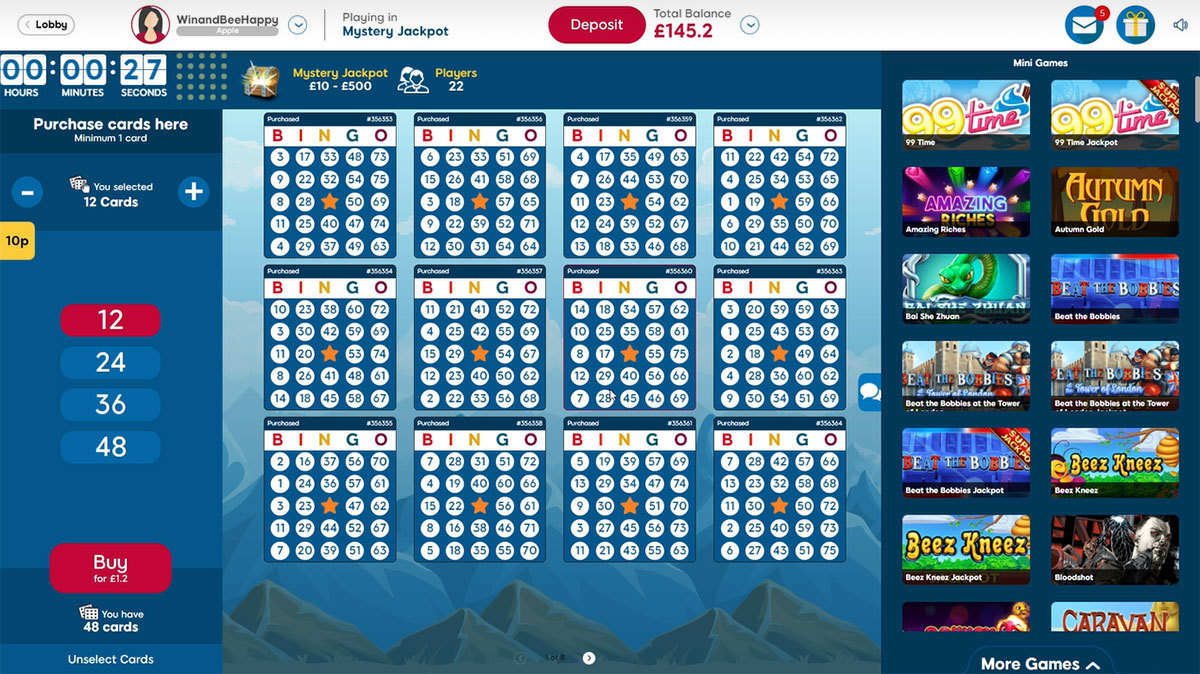 Ever played bingo with cards before? WinandBeeHappy hadn’t either, until she gave the Bingo Vegas room a try. Instead of bingo balls and numbered tickets, players receive tickets with five randomly selected playing cards. A standard deck of 52 playing cards is used when the game begins, and the aim of this game is to match all five cards in one hand before anyone else to grab that full house prize. Sadly, our reviewer had no such luck.

Angry Bingo claims to be home to “red-hot slots” and they certainly live up to that claim. Hundreds of slots are housed within a separate tab of the main lobby, which can be accessed via the left-hand menu. Fairy-tale themed slots, new releases, top 10 in the UK, daily jackpots by Red Tiger Gaming, progressive jackpots and Megaways are the main categories offered with an all-games link and search bar option provided too. 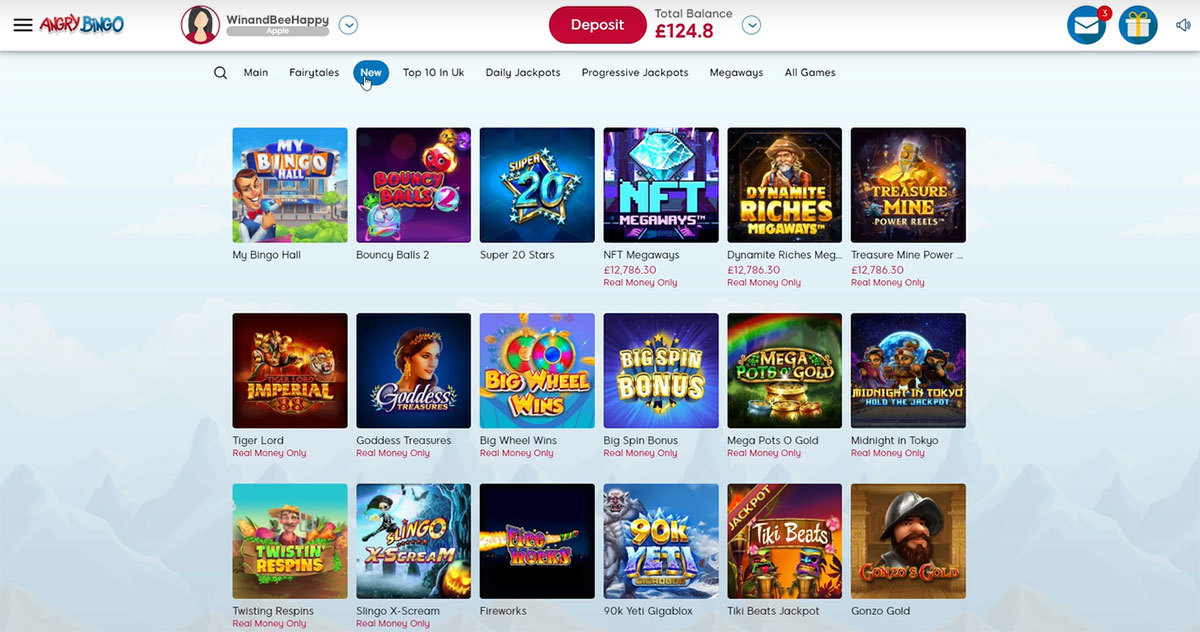 Regardless of the game chosen, when launched, it appears in a new window centrally on your screen. There are no options to maximise the gaming area which means you could be distracted by the gaming options on display. 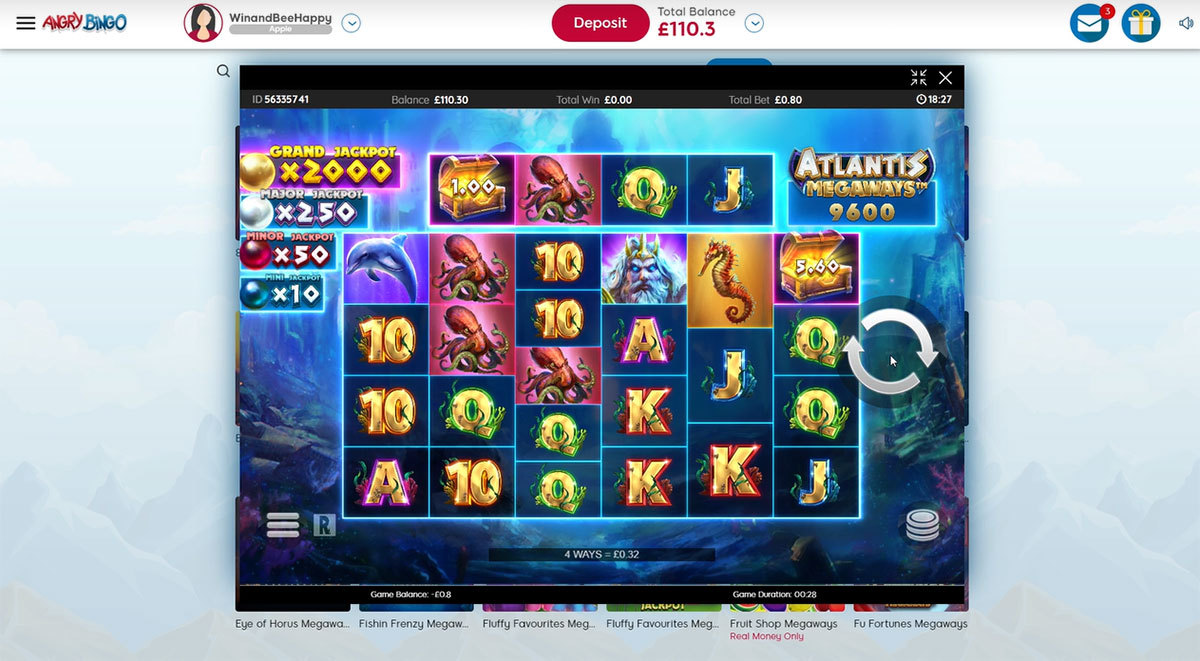 On Thursday 27th January, our tester requested a withdrawal. She deliberately didn’t add any verification docs to see if that would affect the cashout process. Heading to the cashier she requested to withdraw the sum of £75.18p, her entire remaining balance. Once submitted, the status report on-screen suggested it would take 1 business day to be approved before being sent to her payment method.

On Friday 28th, 1 business day later, the status of her withdrawal hadn’t moved from ‘received’. On Monday 31st, four days after the request was made to cash out her remaining balance, our reviewer sent an email to the customer support team to ask how long withdrawals usually take. A reply came a couple of hours later detailing the process, which could take 3 to 6 business days.

Based on the reply, WinandBeeHappy could have her withdrawal as of Tuesday 8th of February. Did she wait that long? No. On Tuesday 1st February the funds were indeed “released” and that same day the withdrawal of £75.18p was available in her bank account without submitting KYC verification documents. 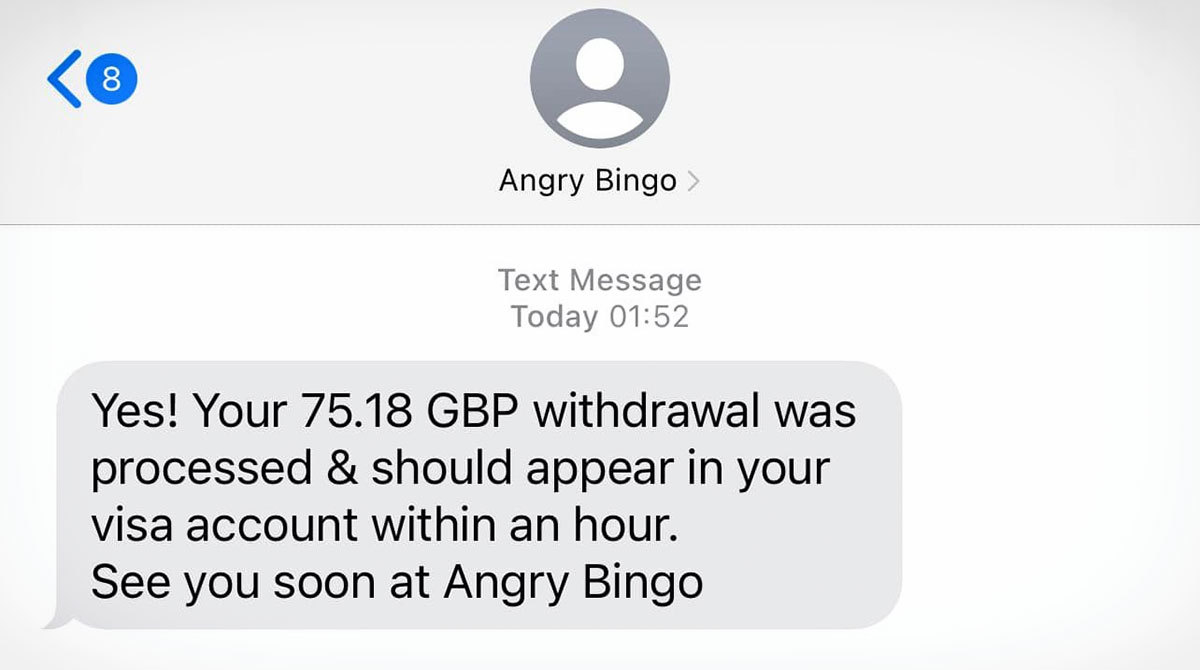 How Does Angry Bingo Stack Up?

The withdrawal process took 5 days to process. This was a week quicker than our reviewer was expecting but, in this day, and age, 5 days is a long time to be waiting for your funds, especially when rival operators can handle withdrawal requests in as little as an hour. It’s also worth noting that no KYC verification documents were required to process the withdrawal. Our test revealed no issues with the site’s operation or cashier.

Despite the welcome offer and other promotions featuring wagering requirements (albeit low), there was one unexpected offer thrown our reviewers way – 20 bonus spins with no wagering whatsoever! The winnings were capped at 10p real cash per spin, but it was real money, nonetheless. WinandBeeHappy played Fluffy Favourites and won £1.64p from this offer. Depositors should look out for no deposit offers. 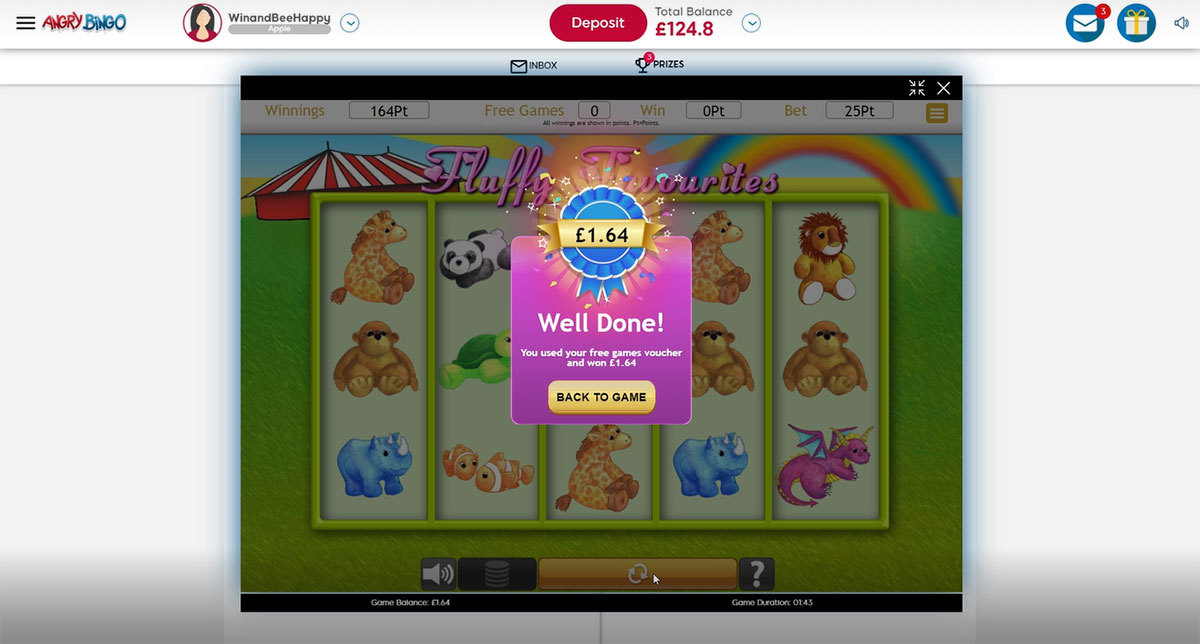 This information concludes this extensive test as part of the project From the Players, For the Players. If you are a member of Angry Bingo or consider making a deposit, we hope this report provided some useful information.