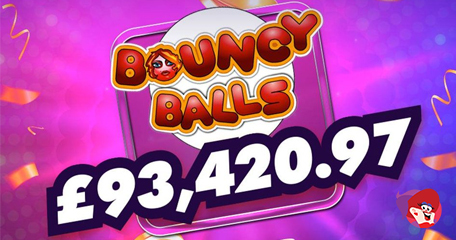 A lucky grandmother from Yorkshire has won more than £93,000 on the Bouncy Balls slot game and all it cost her was just £1! A quid was all it took for the Bouncy Balls jackpot to drop and now the winner has revealed she plans to indulge her family with her new-found fortune. The winner who wishes to remain anonymous told Mecca: “It feels so good to finally stop needing financial support. 2020 has been full of terrible news but following the win it’s turned into an amazing year; it’s changed our lives.”

When Mecca Bingo called to congratulate her, she was still in shock but she plans to overcome this by splashing out on a luxury man-shed for her husband and she is hoping to buy a new home, that coupled with plenty of shopping-sprees with her four children and grandchild.

The overall sum ‘NUTTERS12’ won was £93,420.97p and as many people took to Facebook to congratulate her on her win, some were more intrigued by how one actually goes about landing a jackpot on the Bouncy Balls title – and I’m here to provide the answer! Get ready to bounce and match your way to a huge sum of money (just like NUTTERS12’), when you play Bouncy Balls!

Is it a slot machine or is it an instant win? It’s a little bit of both to be honest and despite NUTTERS12 bagging a jackpot of more than £865K (max stakes play!), the current jackpot has already surpassed! In this game, you need to match 5 or more of the same symbol (balls) adjacent to one another (not diagonal) to win multiple times you stake. The more you match, the more you win!

Various angry-looking balls sit within the 5x5 grid with jackpots ranging between £8K and £865 (and growing!) for low stakes and high stakes play. Minimum bets will set you back just 10p while high roller stakes are capped at £10 a ‘spin’. Yellow, green, blue, orange, purple and red balls have differing pay values, which are determined by stake and the number of symbols in a cluster.

An eight-symbol cluster pays between 1x and 50x for all but one ball – the red ball, which pays the progressive jackpot! With fiery embers for hair, the red-hot ball awards a percentage of the jackpot based on stake when a minimum of 8 clusters award a win, which is as follows:

Bouncy Balls is exclusive to Mecca Bingo and has an RTP of 92.99% and delivers small value wins most often. When winning combinations have been found, winning symbols are removed making way for new, which could lead to consecutive wins! Will you be giving it a try?

I’ve played it a few times but never really won much – a few quid max! Nice to read of winners from these types of games though.