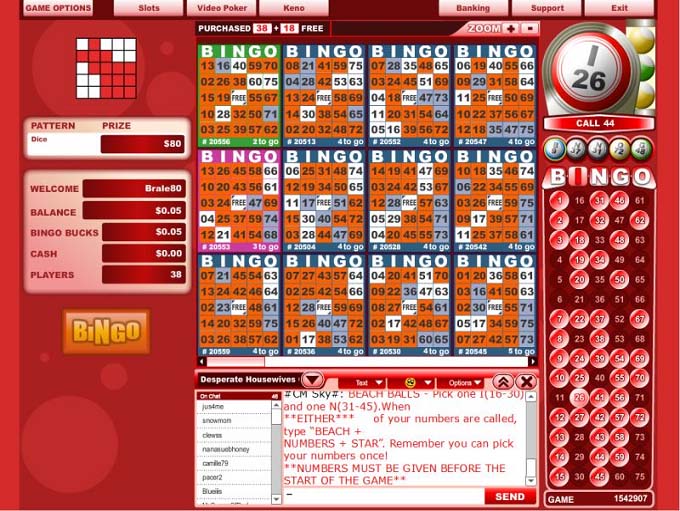 Even though I am embarrassed to admit it I used to watch Desperate Housewives. But even so, I’ve never seen the ending, actually I haven’t seen the last season at all. But on the other hand, since I’m such a TV manic no wonder I watch whatever I lay my eyes on; perhaps this show isn’t as embarrassing comparing to all the stuff I’ve ever watch. Whenever I go to Bingo Canada I stop by the Desperate Housewives room because, obviously, it reminds me of the show.

Of course, as in other rooms, here players can enjoy the 75-ball bingo with some great patters like dice, and up arrow. For me, Parlay has the best games even though I haven’t had much success. It was great that for six bought tickets, players would get three for free. The prize pool has always been pretty great comparing to many other sites, so playing with the maximum number of cards is a must – it pays off big time. I mean, it pays off if one manages to win a game.

I did win in one game earning $48, but that was all. In two games before and all after that win, I wasn’t even close to winning. My money disappeared quickly but perhaps playing the “Transylvania” slot simultaneously didn’t help much. I started off with a minimum bet of $0.20. I wanted to play it because I know it could be relatively stable and I hoped it wouldn’t disturb my balance a lot. But it did, I lose money on it without triggering any feature. I just left a few more bucks so I could play one last bingo game.

I finished off the session very unlucky; close to a win but I guess it just wasn’t my day. Perhaps I should have stopped after that one winning game, but now it’s too late. Well, next time I’m sure I will be a bit luckier.