Bingo Hall is LBB’s March Site of the Month 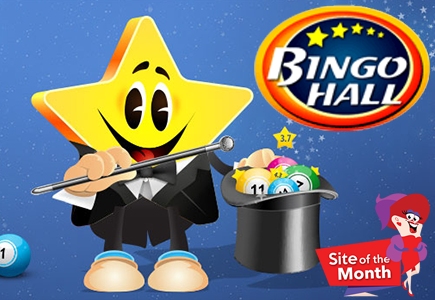 April is nearly upon us and with the dawning of a new month comes a new Site of the Month here at LBB. We have chosen Bingo Hall due to its popularity among you, the members. Improvements have been made over the years leading to the 4 Star overall rating you've awarded them on our Bingo Hall Review. The US friendly brand has been providing players with bingo games since 2002 with a platform that has grown to support titles from multiple providers including Parlay, BetSoft, Rival and TopGame.

You'll find a variety of bingo rooms including Fair and Square, Desperate Housewives, Crazy, Taboo and more, some of which even offer progressive jackpots. The current PJP prize in the Quarters room stands at nearly $3,800. Card prices range from 5 cents up to $3 for the bigger grand prize games.

They're also celebrating their 14th birthday this year and have just completed a special month long promotion in March with $50K in guaranteed prizes and free cards. If you missed out on this action, don't worry there are many promotions and tournaments running every day and there's no better place to get started than right here at LBB!

LBB has partnered with the brand to bring our members some exciting exclusive offers. New and existing players may claim a $65 No Deposit Bonus with a maximum cashout of $100! In an attempt to further please its players, Bingo Hall, along with its sister sites, is the first bingo site to appear in the LCB Shop. For just $5 is LCB credits, depositors can unlock a $55 Free Chip every ten days, which is a pretty great reward for your loyalty.

We hope you enjoy Bingo Hall this month and beyond.
General Gambling News Back to articles

hi, how do i invite my friends too like this page?

Hi alison, the $55 free chip is available in the LCB Shop for $3 in LCB credits. You may redeem the bonus by clicking on your balance at the top right of this page...

Hi alison, the $55 free chip is available in the LCB Shop for $3 in LCB credits. You may redeem the bonus by clicking on your balance at the top right of this page when logged in here at LBB. Good luck!

hi how do i collect the 55 dollar chip after i deposit?