Cleopatra Makes a Come Back in Big-Prize Paying Sequel 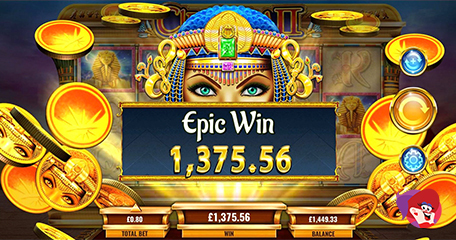 The long-await slot sequel to the 2012 smash-hit Cleopatra is finally upon us, and boy am I a huge fan already! The features and icons from the original release have all been recycled, only with a lot more paying power! It has been almost 10-years since IGT’s seductive queen first appeared on our screens, and strangely enough, she’s as popular today as the day we first met her! Cleopatra II encapsulates all the original features such as scatters, wilds and free games, only in a more immersive setting – and bets start from as little as 20p a spin!

Exciting features of the new online slot include an increasing multiplier and double wins, two independent features with the potential to boost even the smallest of stakes to new heights! Being a mobile optimised game means the ability play on the go, however, you may need to give your screen a little bit of encouragement to load…this can be done by swiping in an upward manner when prompted.

Logging into my Buzz Bingo account for a few games of bingo on Saturday night, my eyes were instantly drawn towards the new games section. Among the latest releases was Cleopatra II, and with me being a fan of ancient Egypt, I thought I’d give it a go. With a deposit of just £20, I took to the reels in the hope of landing a generous win. And I wasn’t disappointed. My bet of just 80p was all it took to land a win of £1,375.56p! But how? The key to huge wins is the bonus spins, where you not only get to play for free, but you get to benefit from a multiplier increase of 1x with every spin.

Only 3 scatters (sphynx) are needed to trigger the free games, but I managed to spin in four, giving me a total of 17 spins on the house. Just 2 games into my feature and three scatters appeared, and this instantly re-triggers your starting spins. All-in-all, I received 34 free games and with each spin came a boost in the multiplier. Spin 5 was a 5x multiplier, spin 10 was 10x and right up to spin 34, which resulted in a multiplier of 34x being attached to my winnings.

The largest of my wins came on spin 16, when cleopatra completed a five-of-a-kind win line of cat symbols. Not only did the win benefit from the ‘double win’ system, a system triggered when Cleopatra falls as part of a win, but that 16x multiplier too! To say I was gobsmacked was an understatement.

My luck was most certainly in, because I had already won £400 just 10-minutes earlier on Wild Walker, the Pragmatic release loosely based on the Walking Dead zombie series. Again, my win was the result of a 75p spin and free games. What started out as a £20 deposit at Buzz Bingo, turned into one large win, one substantial win and a withdrawal request of £1,700! And that sum of money took just 4-hours to find its way into my bank!

Congrats! I hope I can win a big sum from a small bet soon! Nice to see it can be done!