Couple ‘Feline Fine’ After Landing £1 Million Scratch Card Win; Claim Their Win Was Down to Their Cat! 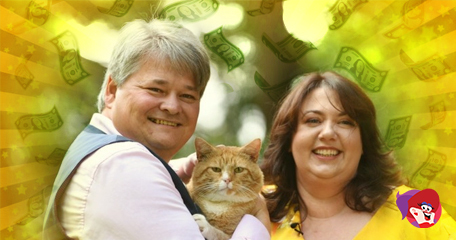 There are many things considered lucky – but a cat? I’ve never heard of a ginger cat bringing anyone luck, until I read about Andrew and Paula Hancock from Nottinghamshire. Back in July, the lucky couple scooped a £1,000,000 scratchcard prize and have thanked their cat Shortcake for the tremendous win. The only reason why Andrew won the prize was because of a mad-dash to the shops to get some much-needed cat food for their beloved pet.

The pair who run a catering business discovered when it came to the cat’s dinner time, Shorty (his nickname) had no food, so off he went to his local petrol station to pick up some food and whilst there, he also purchased a £5 Monopoly Millionaire scratchcard and won one of the four top prizes of a million pound.

When talking to press, Mr Hancock relived how the evening’s events panned out:

He continued: “So I went into the petrol station, filled up, got a scratchcard and went back to the car and scratched it in the car – and still didn’t get the cat food. So, I scratched the card and I’m looking at the card, in disbelief. So, I thought, I’ll get straight home and go out for the cat food and get that later on. Which we didn’t, so he had ham. He was quite happy with that.”

After revealing his win to his family, Andrew hid his scratchcard inside a Gordon Ramsey cookbook for safe keeping, and it only came out when the National Lottery officials validated his win. The pair plan on having some time off work and going on holiday to Australia (among other places) with their winnings.

Since the win, Paula has only made one purchase; a new mobile phone for her 12-year old son but she has confessed to never being off Rightmove. Plans for the money have already been laid out; aside from the trips abroad, the pair plan to pay off their mortgage, get a new car and take their son to see the Olympics in Japan – he is a judo greenbelt after all.

Andrew said: “If it wasn’t for Shortcake, we wouldn’t be millionaires.” When speaking to the press, Andrew claimed his cat has never brought them luck before; “He’s just a normal cat who keeps everybody up at night!” Thanks to Shortcake’s part in the big win, he will now receive an upgrade on his food choices.