Deal or No Deal Goes Live in New Casino Vertical 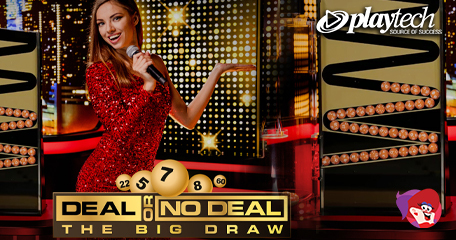 A new gameshow casino vertical is about to hit the online casino scene and it’s based on the iconic Deal or No Deal television gameshow. We’ve seen slots, bingo and even instant wins delivering all the fun of the smash-hit TV gameshow and now we’re about to witness a new phenomenon – Live Deal or No Deal – The Big Draw, and it’s coming to a Playtech powered casino near you soon!

Not to be confused with Evolution Gaming’s Deal or No Deal Live, Live Deal or No Deal – The Big Draw is styled on a lottery game with all the fun and excitement of the much-loved gameshow. Set within an immersive studio setting with dramatically changing lights and a friendly dealer, the live casino game is based around 16 numbered prize suitcases, in a similar style to Evolution’s vertical, only entry is not required through qualifying rounds (where you pay to play!).

Edo Haitin, Managing Director at Playtech Live Casino, had this to say on the latest invention: “We’re delighted to be bringing the excitement of one of TV’s most enduring formats to Live. With the addition of the mini draw side game, allowing players to buy multiple tickets with up 6 points of decision making during the game, whether it be to buy more balls or take the bankers offer, Live Deal or No Deal – The Big Draw brings the player a new level of engagement and strategical involvement.

For many players, Live play is as much about the experience as it is about gambling, and we’ve seen a growing trend towards gameshow-style formats – which is why we’re so confident Live Deal or No Deal will definitely be a big draw.” It’s like DOND bingo crossed between lottery and live casino!

How to Play New DOND Live

Fifteen numbers will appear on a player’s ticket, with the sixteenth being the player’s prize. Balls will be drawn from the lottery style pot and as balls are drawn, numbers will be removed from your ticket along with prizes. The banker’s bar will begin to fill at the same time and once seven numbers appear on the banker’s meter, he proceeds to make his first offer. Accept and the game ends there and then, or you can choose to play on for a bigger cash offer on the purchase of five additional balls.

What makes the game even more…

…exciting is the mini draw side game with prizes based on the first 20 balls drawn. It’s easy to understand, but a tutorial has been developed to help players understand how to play and win, which will launch on screen when accessing the casino game for the first time. On first impressions, it’s extremely similar to Mega Ball – the live casino bingo vertical also by Evolution Gaming, but it’s the DOND element that really makes all the difference.

Lex Scott, Head of Business Development for Banijay Brands added: “We’re thrilled to be extending our partnership with Playtech through the launch of Live Deal or No Deal – The Big Draw. The in-studio presentation is fantastic and, with the combination of a proven format and innovative elements such as the mini draw, we believe it offers something genuinely unique and entertaining for Live players which aligns with the brand.”

Another fine example of how one gameshow can provide many different games, and each with their own twist! I’ll be keeping an eye open for the launch of this one!

Another fine example of how one gameshow can provide many different games, and each with their own twist! I’ll be keeping an eye open for the launch of this one!