Gonzo is Back with a 'Mega' Quest for Hidden Riches 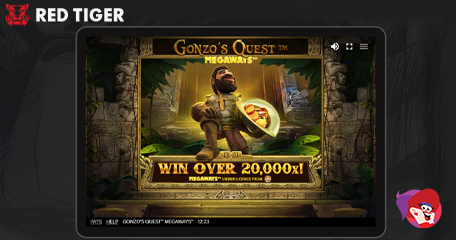 El Dorado has long been linked to hidden riches with the history books first sighting the area of immense wealth back in the 16th century. Sir Walter Raleigh is even documented as leading an expedition in the 1500’s to try and uncover the lost city, but all efforts to find the princely riches failed. That is until now!

Back then, resources were very limited, and a quirky Spanish guy known only as Gonzo, hadn’t made his entrance into the world, and he believes he has what it takes to uncover all those lost treasures. And the good news for you is he’s willing to cut you in on the deal, so long as you accompany him on his quest!

It’s been some seven years since the Gonzo’s Quest title graced our screens and many have been wondering if NetEnt were planning a sequel. You’ve other software developers throwing casino games out on a weekly basis (Play’n GO), however, the multi-award-winning software provider would rather focus on quality over quantity.

Rumour had it that Gonzo was due to make a come-back in a bigger-than-ever-before slot machine, and up until a few days ago, I wouldn’t have believed it, until I got wind of his imminent arrival! Set for release on July 23rd, Gonzo’s Quest Megaways is everything you’d expect it to be; big, bold and packed full of epic win potential, but how do you win?

Red Tiger (who NetEnt acquired), has created a stunning release that features all the excitement and thrills from Gonzo’s debut in 2013, with even more immersive entertainment! Boasting a 6x7 reel engine with cascading symbols, players will be headed into the deepest of jungles in search off the lost city of gold.

…by landing the golden shield symbols (bonus or scatter symbols). Usually, wild symbols will only substitute for standard symbols in order to help create a win, but they also substitute for the bonus symbols in this game too and they remain on the reels for a shot at even more wins! a combination of scatters and wilds (as long as there are four in view), will award 12 initial bonus spins.

But where can you play this rip-roaring adventure? Buzz Bingo, where there are three progressive jackpots also on offer, one of which is guaranteed to be won every day!

I love Megaways slots with an increasing multiplier on wins. Dragon’s fire is good at boosting your wins too. Can’t wait to try this one.