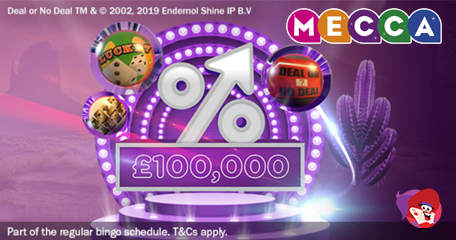 A new month means new promotions at many online bingo sites, but none I’ve come across (yet) are as big as the Mecca June jackpots special. How would you like to win a share of £100,000 just by playing your favourite bingo daubing game? You can jump into ginormous jackpots every Saturday throughout the month at 6pm in 4 fun-filled bingo rooms.

There are five games scheduled across 4 bingo rooms and the fun will begin at 6pm on each day, but no-one knows when the jackpots going to go – what we do know is that the cash is guaranteed to be won by midnight on that day!

The first game was a huge success and saw £35,000 bring won in the Gold Rush room on the 1st of the month, and what a way for the winners to celebrate a new month. You may be a little sad that you missed the first game, but there’s still time to take part.

All jackpot prizes are split 50% with the winner and 50% with all other players in that room, which means everyone is a winner! These special games not only deliver big jackpots but many chances to win – the most being five chances to win in the 75-ball Deal or No Deal branded games. The jackpot-triggering ball call increases as the session goes on, making it easier to win in later games…

…but it can go at any time during the session, making it super exciting. You have the option to purchase your tickets in advance; head to the Mecca Bingo lobby to do this.

The bingo schedule for the remining games is as follows:

To guarantee all jackpots are won before midnight, ball call counts will increase to the maximum on the final game just prior to midnight. The ball count for the remaining games (per hour) is as follows:

Let us know how you get on!

Can I pre-buy into all games for an entire evening? Or can I only buy into one game?