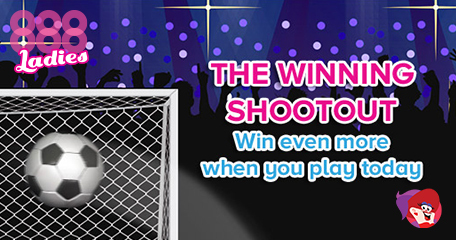 To celebrate two of the biggest European football events featuring all English teams; the Champions League Final and the Europa League Final, 888 Ladies has created a special football-themed game which will be dishing out guaranteed bonus spins, but before you step up to the penalty spot and get ready to take on the goalie, you need to qualify.

You can score big and come out a winner even if your team fails to, thanks to this new and exclusive game. The ‘Winning Shootout’ was created in honour of these two football events – both of which are guaranteed to have an English winner…

That’s enough about football, now back to the promotion.

He Shoots, He Scores:

Unlike a game of football, the ‘Winning Shootout’ will guarantee you to be a winner, all you need to do to qualify is;

To get in on the action you’ll need to play one (or more) of the following:

Which one will you be playing? Remember, you only have a limited time to get involved in the football fun at 888 Ladies Bingo.