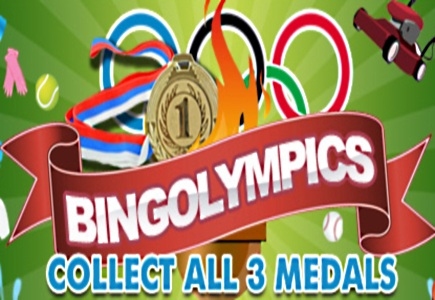 Campaign dedicated to the Olympics

The users of Bingocams' dedicated Dutch site have much reason for joy with the new promotional campaign launched by the company in tribute to the currently ongoing Olympics.

The promo engages its participants in bingo battles, in which they can get both freebies and some generous cash prizes. It is run daily from mid-day to 1pm and 7pm until 8pm in Bing Bling and Celebrity Millionaire rooms.

The point is for players to earn medals which grant access to rooms that contain loads of prizes. This can be done by getting full house or by achieving a bouncing bonus.

The company also announced the current itinerary for the promo which looks like this:

As soon as they get all three medals, players can enter the run for a Euro 1000 Euro jackpot, a generous reward for their dedication and activity on the site.
Bingo Games Bingo Promotions & Bonuses Back to articles