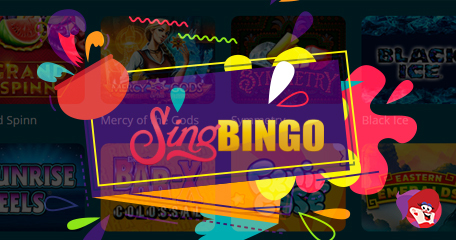 There are many big bonus features and even bigger jackpots going for a song over at Sing and there’s no chance of your wallet catching laryngitis, what with bets starting as low as 1p a win line! Recently, a total of 17 new games have been added to the site’s game lobby and that means more chances to win than ever before, so let’s take a look at what’s on offer...

Despite only just being released, four of the seventeen slots already found themselves in the popular section; Grand Spinn, Mercy of the Gods, Symmetry and Black Ice. NetEnt are the brains behind the Grand Spinn and Mercy of the Gods slots; the former delivers nostalgic gameplay with a 3-reel engine and iconic bars and fruit symbols whilst the latter takes you on a journey across the Nile, where three progressive jackpots can be won on any spin!

Grand Spinn takes you back to the glamorous Art Deco period with its 3-reel, 1-win line setup, but unlike classic slots, this one features multipliers, a nudge feature and 3 progressive jackpots. Whenever a winning combination appears, the nudge feature comes into play and this could see you land a huge win. The nudges are the key to unlocking the big cash too; if the jackpot symbol sits to the top of each reel after the nudges have played out, you’ll be awarded the lowest jackpot. The big one is kept until you land a win line of jackpot symbols.

Realistic Games powers both the Symmetry and Black Ice slots and both deliver 3D gems and jewels but in two totally different settings. Symmetry is a 5-reel, 10-win line slot which pays left to right, right to left and in the middle (all wins pays). The bonus feature on this one is rather unusual; when all five reels stop and three of the same symbol lands in view, the bonus round is awarded. Tap to select a reel and all remaining reels that don’t already feature that same symbol will re-spin and land with 1, 2 or 3 of the same symbols. Another bonus comes when you spin in a symmetrical pattern; the reels spin to guarantee a full house of the stated symbol.

Black Ice takes you deep underground to an icy setting. On the 5-reel, 10-fixed win line engine are numerous crystallised gemstones and jewels. The diamond is wild and there is the potential to unlock re-spins and bonus spins, but all in all, the title is a simple slot with a jackpot of up to 250 coins on offer.

If you’d like to try your luck with any of the 17 new games at Sing Bingo, sign up and receive a wager-free welcome offer! Simply make a deposit of £10 and receive 120 free bingo tickets where all winnings will be credited in cash!