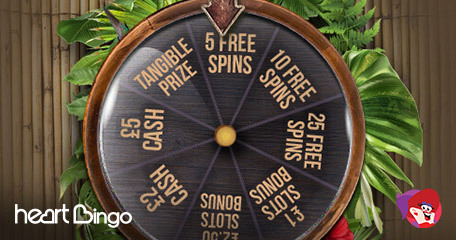 Multiple Summer Prizes (or Cash!) to be Won!

The sun has got its hat on, hip-hip-hip-hip-hooray, the sun has got its hat on and Heart Bingo invite you to come on out to play! Summer is here and hearties are able to win themselves some fantastic prizes with the new summer dreams wheel. It’s packed with cash, bingo bonuses, games bonuses, casino spins as well as a range of summer garden goodies and they’re all guaranteed to be won!

Heart Bingo’s new daily promotion is open to existing players every day until Sunday 24th of this month and qualifying for a spin is rather simple. The first step is to opt-in, as always, next step is to wager £20 (cash) on any of the qualifying games and you’ll get a spin the same day. The great news is that everyone who takes that wheel for a spin is guaranteed a win…

…which means you could win yourself a hot tub, gazebo, top-of-the-range BBQ, a chimney and much more! The following prizes can be won each day, alongside bonus spins and cash bonuses – cash bonuses with no wagering requirements! Plus, those bonus spins also come with a very important rule…

…if you’re lucky enough to win from your spins offer, you will get to keep every single penny of it! No wagering requirements on spin wins here either! Now for the prizes.

Hearties who win a tangible prize have the option of taking delivery of said prize, or the cash! The money option will see the cash value (listed above), credited to the winners Heart Bingo account (as cash!), within 72-hours of being notified of the win.

Great promotion again. You can find winners on facebook too which is great.