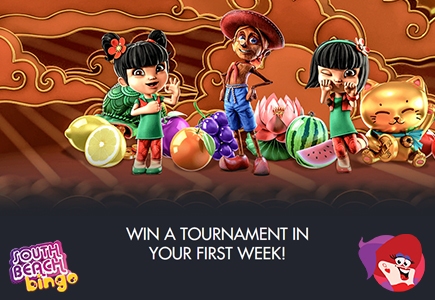 From 13th to 19th November, South Beach Bingo will be making their new players feel like they've long acquired a veteran VIP status with the site. During this period, they will be hosting New Players Weekly Tournament (the name itself hints that there will be more of these in the immediate future!) for all of their newly registered players whose only concern should be that they make a deposit – any deposit – in order to earn tickets for the Tournament.

This is such a great way to give your novices a taste of what's to come once they've acquired higher levels of VIP hierarchy. The 1st place prize is $200 in cash, 2nd prize equals to $100 and 3rd - 20th places will each get 50 extra spins.

In order to win the tickets for the tourney, you need to spin the reels and wager any amount you like on the following slot games: Fa Fa Twins, Fruit Zen and Pinocchio. The site's system will track each player's progress by converting every bet on slots to tournament points. When the tournament ends players will be ranked according to the number of points they gathered throughout the competition and the player who has collected the most points is the winner.

What a great incentive to join the site! Good luck to all who take part in this great promo...
Bingo Tournaments Back to articles