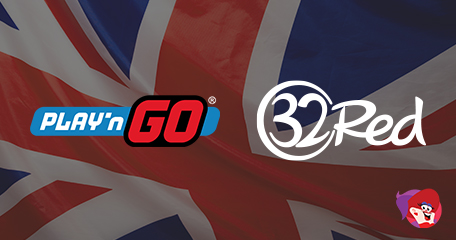 Play’n GO, the world’s leading casino entertainment provider famed for their Book of Dead release, has gone live with Kindred Group brand 32Red, bringing its games to the operator’s UK players for the first time.

Anna Mackney, Regional Director, UK, Play’n GO said: “Partnering with 32Red is yet another major coup for Play’n GO, as we join forces with one of the UK’s powerhouse gaming brands. This is a strategic partnership between two forward-thinking and customer-focused businesses. We’ll be working together closely to make sure we deliver for players.”

Adam Newnham, Commercial Operations Manager, 32Red, added: “We’ve seen the success other Kindred Group brands have enjoyed with Play’n GO over the years, so it became a priority for us to bring these classic titles to our players in the UK. With an exciting pipeline of content lined up for the coming months, we’re looking forward to providing more of the best of Play’n GO content to 32Red’s customers.”

On January 12th when the 32Red news was announced, Play’n GO also unveiled a brand-new slot – Invading Vegas, a sci-fi-themed, tongue-in-cheek take on a typical night in Las Vegas. The humorous title promises to spin players up and down The Strip in search of entertainment and big wins! It won’t only be the big neon signs and casinos catching your eye, hoards of aliens will too as an invasion is guaranteed to occur!

Extra-terrestrial mayhem is on the cards, plus the potential for extravagant winnings too in this feature-packed release. Highlights include flying saucers that unlock the bonus spins feature, a lock on and re-spin modifier, invading aliens transforming into walking wilds and beneath all the symbols on the reels is a Vegas-sized jackpot! Watch for the reels flipping 180 degrees resulting in the first reel becoming the last. Two of the reels will give the chance to open up a third full reel for fuller wins.

Head of Games at Play’n GO, Charlotte Miliziano said: “Everyone knows the saying, ‘Whatever happens in Vegas, stays in Vegas,’ and we wanted to really push our imagination past the limit with Invading Vegas. Aliens, flying saucers, fake Elvis, old ladies and second-chance jackpots, this game has it all. Players will love the features we’ve packed into this game. From the many ways to win to the unique design and storyline our team has created.”

Was reading only the other day about the book of dead slot, I can’t believe it’s 7 years old! I remember when that first hit the casinos. Doesn’t time fly!