Not 1 – Not 2, But 3 Cool Bonuses (and Subsequent Rewards) to Claim at Frozen Bingo 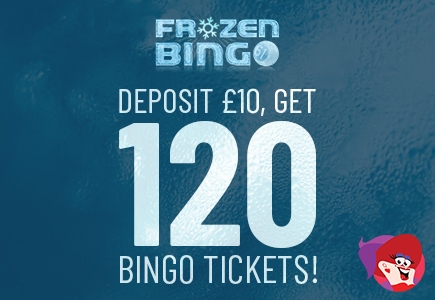 Ice to see you roomies, I hope the weather isn’t too bad where you are because here with me, it doesn’t know whether it wants to shine or rain; guess that’s why this month is known as having April showers. Okay back to business, how would you like to get your hands on at least a trio of rewards when playing online bingo? Sounds pretty cool, huh? There is but one bingo destination that delivers cool rewards and that place is Frozen Bingo.

Already a member? Then you’ll already know how rewarding it can be, but read on, because you could be missing out on something you know nothing about!

Frozen Bingo must have a magician behind the scenes because a £10 deposit will turn into 120 bingo tickets and you’ll get to keep your £10 deposit too. Head to the four special bingo rooms to try your luck with your free tickets and should you be lucky enough to win, all winnings will be credited as real cash – no wagering and no strings attached which means you can withdraw it at any time.

Each bingo room listed below will be open between 10am and midnight and your deposit will trigger 30 free bingo tickets for each of these rooms:

Make a second deposit and receive 60 free bingo tickets to the Choo Choo bingo room, where games play every 20 minutes between 10am and midnight. There are five chances to win in each game and with 60 tickets, you have plenty of opportunities to win. Again, all winnings are credited in real cash and withdrawable.

All good things come in three’s (apparently) and Frozen’s third deposit offer is no exception. A £10 deposit will generate 30 free bingo tickets to the special Golden Ticket bingo room. Doors open at 10am and close at midnight and each 90-ball bingo game will deliver three prizes; one-line, two-lines and a full house.

Every time you top up £10, you’ll be able to claim the real deal; you’ll get 24-hour access to the Re-Freeze room and bingo tickets to one of the exclusive bingo rooms! Whenever you make a deposit of at least £10, you will get up to 40 bingo tickets to the exclusive rooms – rooms that are not featured on the wider network – the Dragonfish network. With more than 100 games playing every day, you'll have plenty of chances to win! This exclusive room can be found within the exclusives tab within the lobby.

Wait – there’s more! You’ll also gain a special entry to the free Re-Freeze game, where there’s a daily £500 prize pool up for grabs. Get 24-hour access to this room every time you deposit! Cards cost nothing and there’s a prize of between £25 and £50 to be won every hour from 11am until midnight!

Terms and conditions apply.
Bingo Promotions & Bonuses Back to articles

I’m already registered but forgot about the re-freeze room! I’ll be heading there tonight.

"Incredible prizes to be won th..."