Picture Bingo Arrives at Tombola: Three Unique Rooms to Choose From! Which Will Be Your Favourite? 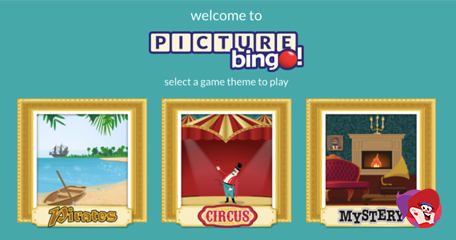 Roomies, have you seen the new bingo game over at Tombola? For a few weeks now, the Tombola team has been teasing us with a new game and now, that game is finally here and ready to be discovered. On 26th June, an announcement was made:

“The wait is over!

Try it now and see which is your favourite!”

Put Yourself in the Picture:

There are three unique rooms to choose from: Pirates, Circus and Mystery. Whilst each room bears a different theme, the aim of the game is the same. Instead of a bingo game with numbers, these three bingo rooms have pictures…

…hence the name! You can purchase up to 3 tickets per game and there are 4 ticket prices: 5p, 10p, 25p and 50p. Each ticket contains 15 unique picture symbols linked to the theme you have chosen. As calls are drawn, simply match five on one line to win the one-line prize shown. Each room also delivers two-lines and a full house prize – as well as a jackpot for calling house within a set number of calls.

Now, for those of you who have played at Tombola before, Pirates within the Picture Bingo is not the same game as the other Pirates. Have I just confused you? Okay, let’s rewind a little. Before the launch of Picture Bingo, Pirates was already a popular feature of the bingo site and delivered a one-line and full-house prize with an optional jackpot (if you’re quick enough). This variant’s games are styled on a 90-ball game with three prizes and a jackpot for those who can call house within the stated number of calls.

The prizes that can be won will depend entirely on the price of your tickets. My sister was lucky to win today – not once, not twice – but three times in one game! For 25p a ticket (75p for the game), she won the two-line prize, the full house and the jackpot for calling within 26 pictures! What a lucky devil and her name is ‘missnotsolucky,’ I think she should change that! My not-so unlucky sibling won £60.94p for the two-line prize, £120 for the full house and £500 on top for the jackpot – a nice sum of just over £680 for 75p stake.

Each room boasts a chat feature and a wonderful theme. Pirates will take players to an exotic island where the ocean gently caresses the golden sands. Pictures range from skull and crossbones to hoist the flag. Circus takes you onto the stage with candyfloss, clowns and performing artists. Last but not least is the mystery room, where a cloak and dagger style of game await.

Wow. I missed the news of the new release and I’ve just been over thanks to this post and it’s absolutely amazing. There are so many people playing though, but this...

Wow. I missed the news of the new release and I’ve just been over thanks to this post and it’s absolutely amazing. There are so many people playing though, but this means bigger prizes than usual.