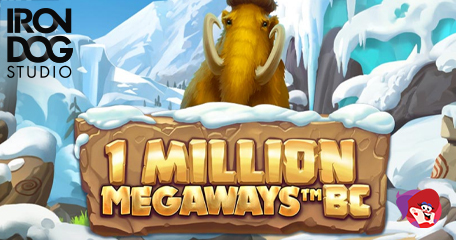 Iron Dog Studios, the talented folks behind many a thrilling slot machine, are back with a new title; 1 Million Megaways BC, with a theme that will not only take players back in time but immerse them into the future of gaming with more than just your typical number of ways to win!

Notorious for their 6-reel engine with up to 117,649 ways to win, Megaways titles are extremely popular, there’s no disputing that, but Iron Dog Studios wanted to create something even more exciting with more ways to land a win than ever before, so they put their heads together and came up with a mind-blowing concept offering more than 1million ways to win per spin!

Their 1 Million Megaways BC release may offer prehistoric gameplay, but the bonuses are anything but! Players will be transported on a journey back in time where man and beasts roam free on an ice-covered landscape stretching from one end of the globe to the other! If you manage to survive the harsh and rugged environment, you’ll be rewarded with up to 1,058,841 ways to win!

The base game is action-packed courtesy of a cascading reel engine and increasing multiplier. Land four consecutive wins to be granted access to the bonus spins round where the reels open up more winning opportunities, more ways to win and multipliers of up to 45,000x! A mammoth (additional) reel comes in to play during your free games offering an additional multiplier, five extra bonus spins and a sticky wild!

Big Time Gaming’s iconic Megaways mechanic is the backbone of this exhilarating slot machine, but we need to give Iron Dog’s ‘tumble trigger’ some gratitude too as it offers edge of your seat entertainment on every single spin! Plus, their ‘lock-it’ reels system replaces the usual 7-symbol high reels with up to 9 symbols, which makes landing a win seem almost inevitable!

1 Million Megaways BC is available to play at many online bingo and casinos from September 2nd and will even be featured as part of a television campaign later this month. Kevin Reid, Chief Commercial Officer at Iron Dog Studio parent company, 1X2 Network, had this to say on the latest release: “1 Million Megaways BC is the first ever Megaways game to offer players more than one million ways to win. This, combined with or Lock-it Reels system, will deliver plenty of mammoth wins.

We are thrilled to be able to offer 1 Million Megaways BC to our operator partners, and for William Hill to be featuring it in its upcoming UK television advertising campaign. The game really does have what it takes to top the charts and we can’t wait to see players landing some beastly wins.”

I couldn’t get my head around 117,649 ways to win! How do you even come up with a system to offer over a million ways to win! It’s unheard of and for this reason...

I couldn’t get my head around 117,649 ways to win! How do you even come up with a system to offer over a million ways to win! It’s unheard of and for this reason alone, I will have to see what all the fuss is about!

"Another fine example of how on..."