£105Million EuroMillions Jackpot Won by Lucky UK Ticket-Holder – Could it Be You? 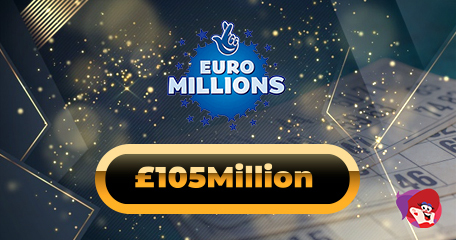 On the 25th anniversary of the first-ever National Lottery draw, a lucky ticketholder from the UK managed to win the life-changing sum of £105million. The news comes of the win after another unnamed player from the UK claimed the record jackpot prize of £170m, taking the total number of 9-figure sum winners in the country (so far) to four.

In June, an unknown lottery player won £123million and a few months before, in January, a couple from Northern Ireland went public with their £115million win. We brought you news not too long ago of Ade Goodchild, another UK player who won £71million but it wasn’t the first lottery win for his family.

The lucky numbers that netted the recent winner that substantial sum of £105million were 08, 10, 15, 30 and 42 with the Lucky Stars of 04 and 06. On the same draw on Tuesday night, someone in the United Kingdom also became a millionaire by matching the Millionaire Maker code ZMSF62402; what a momentous way for the National Lottery to mark their 25th-anniversary milestone.

To coincide with the anniversary, The National Lottery gathered a group of lucky winners to reveal how their lives had been transformed, with winners from each of the consecutive 25-years speaking up, starting with Deana Sampson who went from £3.60p in her bank to £5.4m in 1996. First purchases included trainers, a bungalow for her parents, a yacht for herself and much more! Celebrity photographer Sven Arnstein was there to capture the events of the day which can be found on the website.

To say #ThanksToYou, The National Lottery is offering free entry or special offers at hundreds of venues from November 23rd until December 1st. To receive entry, simply show a scratchcard, lottery ticket or online play screenshot at more than 100 lotteries funded projects and attractions around the UK.

“Thanks to National Lottery players, over the past 25 years £40 billion has gone towards funding good cause projects – that’s over £30 million each week. The amazing projects who are making a huge difference in their local communities want to say #ThanksToYou to the National Lottery players who have made their work possible by offering free entry or other special offers during the #ThanksToYou period.

We are delighted to be celebrating The National Lottery’s 25th Birthday this year, a landmark moment to highlight the incredible difference The National Lottery has made – and continues to make – to the lives of people and communities throughout the whole of the UK.”

Offers include free entry to Seaton Jurassic, Devon Wildlife Trust to free entry into the Eden Project. Don’t miss out on this freebie. Head to the website to see all participating venues in your area.

What a phenomenal sum of money to win! I never manage to match two balls let along all of them which is why I stopped playing a while back.