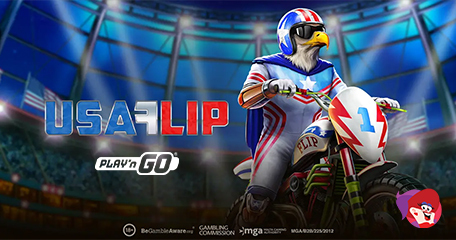 As Light As A Feather with Dynamic Action

The creators of the hugely popular Book of Dead slot release are back with a new casino game, only this time it’s theme is very different to what you might expect! A bald-eagle with gravity-defying stunt-skills has pushed the usual fairy tales, ancient folklore and mighty Gods aside and we suspect it will gather swathes of spectators!

Who doesn’t love a bit of stunt-biking action, especially when the star of the show can bring a catalogue of winning opportunities and bonus features! USA Flip was released on November 17th and is described as an “action-sports thriller.”

A Ticket to Ride Ahead

Take your seat on desktop or mobile and watch in awe as the Flip, a stunt-biking bald eagle takes to his bike and to the air in search of epic wins! The more tricks Flip does, the better the prize money. Bonus features include:

High paying symbols are the wild bald eagle and motorbike, each awarding 250 coins per five-of-a kind combination, hot wheels and helmet award up to 80 coins while rockets and motorcycle glove award wins of up to 40 coins. Low paying symbols are card values of J, Q, K and A.

“This game really epitomises what we’re best at in designing a slot that dares to be different. We really wanted to take our fans on a new trip, provide them with even more ways to win and add some fun competition into the mix. Our team did that once again with the Near-Win Re-Spin feature, which really builds up the suspense. With the same level of detail and another unique storyline, I can’t wait for our fans to check it out.”

USA Flip is a 5-reel, 20 fixed win line slot and it is available to play at Play OJO Bingo (home of no wagering!), with wins of up to 100,000 coins available in any spin!

Seems very different to what we’re used to seeing from play’n go. It’s usually all gods and Egyptian themes. Dare-devil bald eagle sounds different and is worth...

Seems very different to what we’re used to seeing from play’n go. It’s usually all gods and Egyptian themes. Dare-devil bald eagle sounds different and is worth a look.