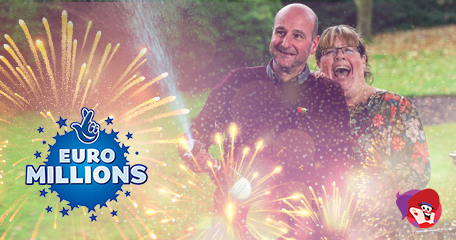 Beating cancer is one hell of an achievement. The disease ruin so many people’s lives so when you receive the news that the grueling treatments and radiotherapy have been a success, you’re bound to celebrate, but for one lucky Brit, she was about to celebrate more than just kicking cancer’s butt!

Lynne Price, a 55-year old laundry worker is celebrating a double win of a lifetime with her husband David, after winning £1m on the EuroMillions just 10-minutes after being told she has been given the all-clear from cancer. The mum-of-three from New Tredegar in South Wales revealed that she had only just opened a letter from her all-clear scan results before her husband came through the door full of excitement!

Opening the door, David revealed that they had just won £1,000,000 in the National Lottery’s EuroMillions Millionaire Maker. Lynne said: “I'd just read the letter saying I had the all-clear when David came home from work to say we'd won the lottery. I can't tell you what I said, it's too rude, but I was in total shock.I was shaking and totally lost for words that never happens. I went and had a bath for two hours and just lay there trying to take it all in."

Whilst at work, David decided to check his lottery ticket and was amazed at what he saw. The 53-year old insisted he lave work to give his wife the good news personally: “I went home to tell Lynne, but she had some big news of her own. The letter saying she had the all-clear is worth more than a million to me."

Back in 2015, Lynne was diagnosed with breast cancer and after extensive treatment, she underwent a scan in October this year. The pair are now planning to say bingo balls to the Brexit Election by escaping the country next month and at the same time, they will be celebrating their 33rd wedding anniversary.

Strangely enough, this isn’t the first lottery win within their family – it’s the third! How lucky is that? The married couple revealed that they’re distantly related to Ade Goodchild, the 58-year old who scooped a massive £71million on the EuroMillions back in March, plus David’s sister was one part of the Cardiff cigar factory syndicate which won a huge sum of money in the nineties.

It’s no surprise David’s mates have nicknamed him ‘Lucky Dai’, but what is surprising is that the name was given to him long before his lottery win. He said: "It was always a bit of a joke, but now it's really come true. I still can't quite believe it. We've been doing the lottery since it started - you put your money on, but you don't really expect to win a million."

Absolutely wonderful news for the pair of them! Imagine that – beat cancer and beat the odds of 1 in 139,838,160 to win a million pounds! Congratulations.