The Wheel of Fortune 1-Million Megaways is Coming! 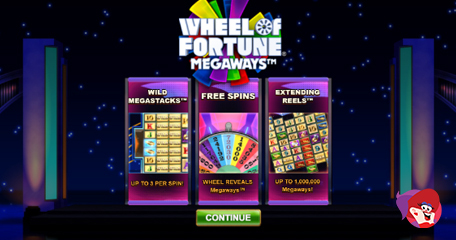 This news is coming hot off the press – hold onto your hats because it’s a corker! I’m excited to bring you details on an upcoming Megaways slot and details of which have not yet been released! This Megaways slot machine is not even on the software developer’s website, that’s how exclusive this piece is.

Chances are you’ve probably already worked out the theme of this slot – the heading was a huge hint at what’s coming! The Wheel of Fortune Megaways is based on the much-loved gameshow where players spin a wheel for points, guess the letters on the screen to bag big prizes! Only, getting a shot at the prize line-up will be far easier what without having to fill in contestant forms or competing against fellow players!

It Promises to be Wheel Good Fun

The Wheel of Fortune is coming soon and is a Big Time Gaming (BTG) powered slot with everything we love about Megaways: 6-reels, many symbols on the reels, cascading symbols, an increasing multiplier during free games and an eye-watering number of ways to win per spin! But what does this one offer that the others don’t?

How about as many as 10 symbols per reel, wilds that can expand to fill the entire reel in which they sit, expansion symbols during the free games feature where twice the number of new symbols will be generated and the best bit I’ve been saving ‘till last – up to 1,000,000, yes, one-million ways to win per spin!

Four scatter icons (game logo) will award the free games feature only before you get spinning and grinning, you must take a spin on the interactive wheel! The numbers on the wheel will determine how many Megaways your bonus spins start with. As ever, a multiplier which increases by 1x is present, but the bigger thrills come with not one, but two additional fun-filled and unexpected features:

The Wheel of Fortune Megaways has everything you need for entertainment including great big win potential! Will you be giving it a spin when it drops? Let us know below!

Wow. I thought the regular Megaways slots were exciting, but this sounds great! I cant wait to get my hands on it!