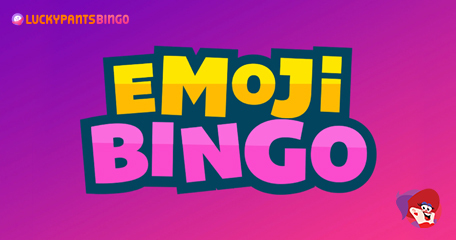 Lucky Pants Bingo has unveiled a new bingo game and it’s one hell of an emojional rollercoaster! Ditching numbered balls in favour of emojis, it’s a game that delivers plenty of fun and big cash prizes! All your favourite characters are featured – from poop to a cocktail and there’s even an appearance scheduled for the shameful monkey and a love-sick guy, and all you need to do to win is match ten emojis before anyone else to land a prize of up to £200!

The new multi-stake bingo game put you in total control and unlike traditional bingo games, everyone has the same chance of winning because you all have the same set number of tickets – one! The prize on offer will depend entirely on the value of your ticket; the lowest ticket prize is 10p and the maximum is £3. The more your ticket costs, the more you’ll win!

Being a 50-ball type of game means there’s just the one winner per game, however, there are jackpots to be won too, even community pots! There are special promos where Lucky Pants Bingo award prizes to players waiting on 1TG and 2TG too, making it so much fun! Starry-eyed man, laughing man, vampire, as good as gold and a sophisticated shade-wearing man could all prove to be very lucrative, but you need to be in it to win it!

Emoji Bingo can be played on mobile and desktop and there’s nothing you need to do other than purchase a ticket and sit back and wait for your ten emojis to appear on screen! You can choose to view your ticket in a more simplified version too; ten icons on a ticket that will vanish once called, or you can have all ten icons bobbing around your screen!

The quirky characters will be waiting for you to join theme between 7am and 3am each day! Will you choose to pop them as they’re called or let them explode themselves? Offers include reduce ticket prices at set times and plenty of chat games to keep the fun going. If you spot a chat host in the room don’t be afraid to ask them if there’s a quiz scheduled because this is how you can pick up little extra bonuses!

Not a member of Lucky Pants Bingo yet? You’re missing out on a monthly member draw, a daily free game to win extra prizes, BOGOF ticket deals, discounts on tickets and much more! Oh, and there’s even a ‘Stranger Thongs’ daily game where you collect peculiar pants and exchange them for prizes! Ready to sign up? You’ll triple your deposit when you do, all thanks to the 200% welcome offer.

OMG! This sounds so much fun! Maybe I’ll be lucky with this one because I’m never luck when it comes to numbers!