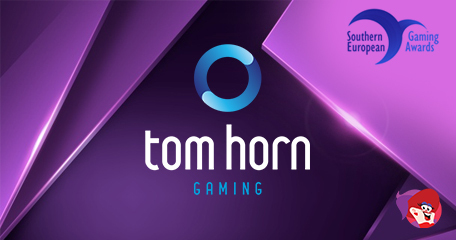 Tom Horn Gaming, a leading iGaming supplier, beat stiff competition from rivals to pick up not one, but two coveted awards at the Southern European Gaming Awards 2019 (SEG Awards). Trumping their rivals, the Malta-based developer was crowned Best Mobile Casino Provider and Online Casino Innovator of the year as a lavish awards ceremony in Milan.

May and September also proved fruitful for the gaming specialist with trophies awarded in both the CEEG Awards and Baltic and Scandinavian Awards, proving the provider is going from strength to strength with their exclusive content. New technology, modern features, innovative gameplay and popularity have driven revenue in the right direction for Tom Horn Gaming.

Ondrej Lapides, CEO at Tom Horn commented: “We’re humbled and grateful to have received these two trophies at the SEG Awards 2019. A big thank you goes to our team for creating games that players love to play and to our clients for giving us their trust and support. A number of accolades we have won this year proves that we’re on the right track and we will make sure to keep up the great job and will be pushing the boundaries even further.”

Only a few days after picking up two prestigious awards, Tom Horn unveiled a brand-new casino game to the online casino scene; Diamond Hill and it’s packed with precious diamonds, thrilling action and brilliant bonus features. The unique reel engine is made up of a 1, 3, 4, 3, 1 grid with 36 win lines and exciting ingredients; multiplier wilds and re-spins which have the potential rack up some serious wins.

Icy lakes, snow-capped mountains and deer roaming free – the only thing missing is the aurora borealis! Wild symbol multipliers appear on reels 1 and 5 only and hold multiplier boosts of up to 9x each and each win which includes this wild will be boosted by that number. Not only that, but the wild winning combination will also trigger a re-spin, locking in the winning symbols at the same time. New symbols which are part of the winning combination will be locked in place too. The re-spin process continues until there are no more winning combinations or until the entire grid displays the same symbol (I.e. big wins!)

The creative chaps behind the brand have certainly been hard at it this year, but they don’t plan on stopping yet. Spinball is set to be released on December 12th and it brings with it a new take on a classic arcade game! It’s packed with exciting bonuses and a myriad of ways to win! Ramp boosters and large pay-outs are guaranteed to make an appearance, but there will be no tilting tolerated!

The Spinabll trailer on their YouTube channel instantly makes me think of the pinball machines I used to play as a kid. Pinball in a slot? It’s certainly unique...

The Spinabll trailer on their YouTube channel instantly makes me think of the pinball machines I used to play as a kid. Pinball in a slot? It’s certainly unique and I can’t wait to give it a shot.