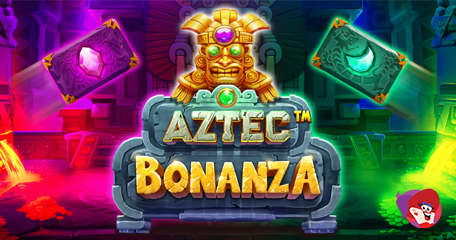 When it comes to slot game bonus features, Pragmatic Play know exactly what players want and no expense has been spared with their latest offering – Aztec Bonanza. The 5x6 variable reel engine aims to transport players to the land of the Aztecs where they have one goal – to unlock the totem jewel.

Ditching the radiational method of a typical 5-reel engine with win lines, the specialist software developer has pushed the boat out and incorporated a brand-new feature – a reel engine which can open up for more ways to win and offer more bonus elements.

At first, the four corners will be covered in stone and opening those stones isn’t as difficult as it sounds; simply trigger (cascading) consecutive wins to unlock those corners for maximum win potential.

As more corners are cracked…

…additional bonuses will come into play. Each unlocked section reveals another level of the totem and if you somehow manage to free the totem from its rocky chains, you’ll get your hands on some bonus spins. When this is achieved, players can win on as many as 7,776 win ways! How phenomenal is that?

Say it How it Is

Aztec Bonanza’s proven theme, fast-paced gameplay and lucrative win potential gives it all the ingredients needed to be another standout hit in the Pragmatic Play slot portfolio.”

Wins of up to 19,000x your stake are waiting to be released from the stone. Spin those reels from as little as 30p to release the big cash. Your adventure will begin with 384 ways to win; land a win and those winning symbols will explode from view and new ones will drop in the process.

As new wins are found, the gaming arena opens up to reveal more chances at landing a colossal win. All it takes is four consecutive wins and those bonus spins are all yours.

You’ll begin with five free games with the full 7,776 ways to win mechanism…

…and on every spin, one of three random features will be activated; mystery symbols being added, low paying symbols morphing into higher paying counterparts or giant symbols measuring 2x2 will appear for greater wins

This latest casino game follows in the footsteps of Pirate Gold, John Hunter and the Scarab Queen plus the howling-sensation; Wold Gold when it comes to the wow-factor.

…with The Wild Machine coming on March 12th and Dance Party on March 18th. Will you go bonkers with mad inventions or shake your hips into the early hours to get your hands on some red-hot cash?

Fancy trying your luck with the new Aztec Bonanza? Make your way over to the mighty Zeus Bingo where there are as many as 500 bonus spins waiting to welcome new players.