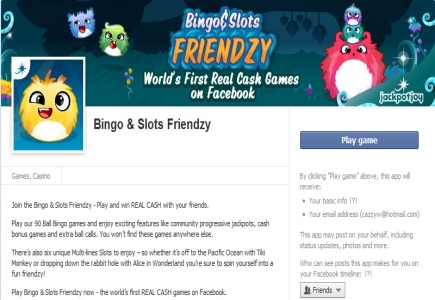 After initial reports that social network giant Facebook has gone live with real money gambling, its partner in the venture, Gamesys released more details on the new real money bingo and slots development.

One of the major points it underlined is that new users will not be able to simply sign up from their Facebook accounts, but that the process is separate from Facebook and that in order to sign up, players will be required to enter email and physical address. However, their activity from Bingo Friendzy will appear on timelines and posts, but not on the feeds of under-18s and non-UK residents.

Also, in order to reduce the problem gambling risks, players will be provided with self-help tools, including the ability to set spending limits.

It was confirmed by a Facebook spokesperson that the game was developed independently by Gamesys and that there is no official involvement from the social networking site.

The social network also said that the decision to go forward with a real-cash gambling app in the UK was motivated by “"a mature and very well-regulated gambling market." It also confirmed that its gaming partner, Zynga, is to launch real-money gambling versions of its games next year.
Bingo Society News General Bingo News Back to articles