Wife Returns from Bingo to Devastation 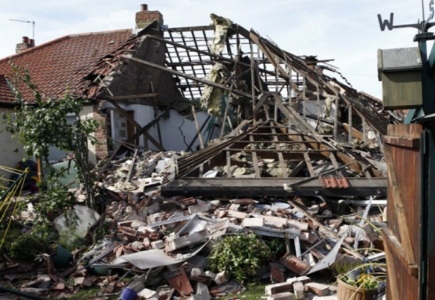 A gas blast wreaked havoc on 63 year old Maureen Robertson's home as she played bingo. The UK resident was out playing bingo for a few hours and in that time a blast of gas destroyed her newly renovated home and nearly claimed her husband's life.

“A single brick can kill you, so I don't know how he survived with all that falling on him.”

In response to the damage caused, Robertson said, “The first day I just cried all day. As time goes on I might feel better. I don't know if Don's come to terms with it all yet.

“I just keep telling myself, 'We can start again'. It's a home.

“I'm not bothered about memorabilia, as long as he's OK.

Don will be in hospital until he gets his strength back. He can only walk three or four steps and he's so tired.

“He said he was in the kitchen when everything just went up in the air.

“He's got singed hair and a singed moustache, but I keep saying 'You're still handsome'.”

“When the house is flattened, I don't know how I will feel,” said Maureen, a 20 year British Gas employee.

“I just can't believe the rubbish. I've seen my microwave and a kitchen cupboard in the garden.

“And my budgie died, which is very sad.”

Robertson is staying with friends and the couple has been given 28 days to make the property safe to live in.

“As soon as it happened, I didn't know what to do. It was desperation. I'm still so lost, I don't know who to phone or how to sort things out, but my friends have helped me so much and I don't know how I will ever repay them. Don will also want to thank the two men who rescued him when he is out of hospital,” she said.
General Bingo News Back to articles

"Love playing at this bingo sit..."