Win an Audi A1 in Exciting New Spin-Off Tournament 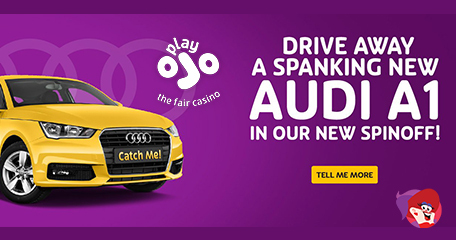 This month PlayOJO is giving away an unforgettable prize and unlike most tournaments, this one won’t cost you the earth to take part in! To get your hands on a flashy pair of wheels, all you need to do is enrol in the ‘catch a car’ spinoff and if you manage to and the number 1 spot on that leader-board at the end of the promo, the car is all yours!

Tournaments without the hefty price tag are a speciality at the home of fair bingo and each spin won’t see money deducted from your bankroll! So how does it work? Tickets to the spinoff cost £1 each, but there are other ways to get your hands on free tickets via daily and weekly promos. Once you have that ticket, a set number of spin will be credited to a slot game and the aim of the game is to gather as many winnings as possible!

Running until September 30th, the catch a car spinoff is grabbing the attention of slots players everywhere – even the PlayOJO Bingo players come to that and it’s for one reason only; great value for money entertainment! One of the popular ways to get free tickets is via the weekend bonus spins package deals where you deposit anything up to £75 and receive 150 free games with no wagering on winnings and a ticket into the spinoff!

Green Valley Games (GVG) Spinning Wilds title is the qualifying slot game this month; a nostalgic 5-reel slot packed with dazzling base game wins, free games and epic wilds! It’s a little like the Bars & Bells title by Amatic, only with more oomph! Bars, bells, sevens and diamonds are among the best paying symbols, but unlike traditional slots, this one offers up a unique wild feature never seen before!

If you manage to spin in three free games symbols, 5 bonus spins will be automatically triggered – this is where the fun begins! There are more wild symbols on the reels now, plus one or two ‘spinning wilds.’ When special wild falls, they begin to spin highlighting the numbers 1 to 4; these numbers represent reels 1 to 4. Once a number is selected, that stated reel becomes a stacked wild for even greater win potential!

Any winnings accrued from your spinoff…

…will not be credited to your bankroll – it’s important to remember that. Each spin (there are 20) will be free. The only cost to you will be the route in which you qualify for the spinoff, either through a deposit promotion or via £1 ticket purchases. You can keep track of how you’re doing via the leader-board. I’m currently sitting in position 476 I’m ashamed to admit, but I tried my best!

Tournaments usually cost each spin too! I’m impressed with what I’m hearing about PlayOJO. I may have to give this one a go!