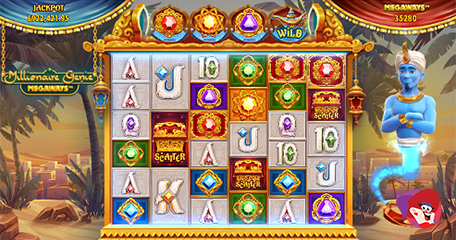 The Genie in the Lamp Returns for Infinite Fun!

More than a decade after 888 Gaming developed and released Millionaire Genie, we have a sequel – a Megaways sequel, and it comes with 6-reels, up to 117,649 ways to win per spin, infinite win multipliers, magic lamp wilds, a bonus spins feature as well as a progressive jackpot! The hugely successful Millionaire Genie has been entertaining players around the globe for 11-years with its random drop jackpot element and it shows no sign of stopping!

Compared to the original, this latest release developed by Section8 Studio offers more ways to win per spin with its cascading reel mechanism and generally looks to be different, but trip away all that refinery and what have you got? A progressive jackpot slot with endless entertainment!

Playable from 20p to £20 a spin, that current jackpot of more than £900K can be won randomly on any spin, so bet savvy not silly! Of the many symbols sandwiched between the golden pillars, only two are of major importance, first being the magic lamp and the second being the treasure chest. Magic lamps (recycled from the original title), are wild symbols and are designed to help create wins where they may have been missed by substituting for all other symbols (bar scatter). No need to rub these lamps to see some prize-winning action!

Like most treasure chests, the golden and ruby laced loot boxes on these reels come with hidden surprises…

…but only if you manage to land a minimum of four in a single spin. Twelve free games are granted by the blue genie when four scatters appear, with 5 extra spins awarded for each additional scatter symbol in view. More appearing during the feature will be sure to add more spins to your free games tally!

The bonus spin feature is where that exciting win multiplier kicks in and it’s guaranteed to never reset! Consecutive wins increase that win multiplier not spins, so if you were lucky enough to land 10 wins in your first spin a multiplier of 11x would be carried over onto your next win! And remember, no jackpot symbols are needed to trigger that ever-growing pot of cash! Keep an eye on that floating genie because he could leap into action and award big cash when you least expect it!

Where can you play the latest Millionaire Genie Megaways title? Velvet Bingo where a great big 200% welcome bonus and 20 free games wait to welcome new players! One claimed, other prize wheels appear in your account at random, each offering more free games on the house, free bingo tickets, bingo bonuses plus cash of possibly even a combination of all of these.

I love paying the original but it is a little dated. The Megaways slots have much more ways to win than your average slot so I suspect this one will be super popular...

I love paying the original but it is a little dated. The Megaways slots have much more ways to win than your average slot so I suspect this one will be super popular when word spreads of its arrival.