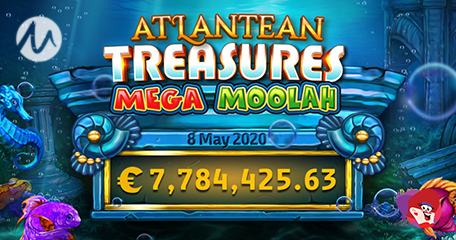 Have you played the latest progressive jackpot title by Microgaming yet? Atlantean Treasures Mega Moolah invites players to dive into an ocean of big wins via a sophisticated ‘win both ways’ reel engine and that’s exactly what one lucky punter did last week when they landed a win of a life-time!

I must admit, I’m not a huge fan of the game because those pesky golden pearls have a habit of appearing and filling what seems to be an endless crustacean! For me (anyway), it was like feeding a horse sugar lumps! I assumed when the oyster was full to the top with golden pearls and sunken treasures, the progressive bonus is awarded, but alas, it was not to be!

On May 8th, one lucky player at River Belle Casino joined the list of Microgaming-made millionaires, when the sum of €7,784,425.63 was triggered. The seven-figure sum is part of the €1.1billion already paid out across the jackpot network and all wins are paid as real money lump sum winnings!

Developed exclusively by Neon Valley Studios, the oceanic adventure casino game delivers thrills via a 5-reel, 10 win line engine. Wins fall from left to right and right to left and the bonuses are superb. Expanding mermaid wilds, re-spins and shimmering pearls and a bonus wheel provide great value for money, especially knowing that life-changing wins can be won from the lowest of stakes!

“Congratulations to the winning player for hitting the first ever Mega jackpot on Atlantean Treasures: Mega Moolah. The tremendous €7.7 million win marks another milestone for Microgaming’s progressive jackpot network, and we look forward to further enhancing our growing portfolio with additional progressive games to deliver even more entertaining gameplay experiences and opportunities to win,” said Jean-Luc Ferriere, Chief Commercial Officer at Microgaming.

The adventure begins on the vast seabed of the ocean. The exact location has not been disclosed. From 10p to £200 a spin, the 5x3 engine houses all sorts of exotic marine life; from plants to fish. Golden pearls can appear on any of the symbols and these will be gathered and placed into the large crustacean to the left of the screen.

Mermaids are wilds and make their appearance on reels 2, 3 or 4 – sometimes on all three! When they do happen to come into view, a free re-spin is granted – she will remain locked in place while the remaining reels spin for a second shot at winning.

When that oyster is fit to burst with treasures gathered from the ocean, the bonus wheel is awarded, and this will result in you winning one of the four progressive jackpots up for grabs. And, despite the seven-figure sum being won recently, the top prize has already smashed through the £8million mark!

Superb win! I too have filled the oyster thing but have never triggered the bonus. I’m sure once that is full you’re supposed to have a go at winning one the cash...

Superb win! I too have filled the oyster thing but have never triggered the bonus. I’m sure once that is full you’re supposed to have a go at winning one the cash pots. I think I’ll stick to the Absolootly mad one – because I’ve trigged it a few times.

"Groove are teaming up with lot..."

"I always thought these games w..."

"What a rollercoaster of emotio..."

"PayPal is available to UK play..."

"Even though the PayPal banking..."