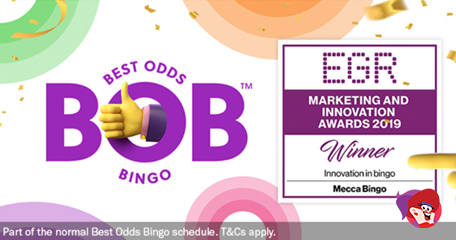 Have you heard, BOB has only gone and picked up the Innovation in Bingo award at the EGR Marketing and Innovation Awards 2019! This coveted accolade recognises how unique BOB is, and to celebrate, Mecca has added some great new games to the bingo schedule. That’s great, but who the heck is BOB? For those of you who have yet to try their luck with the unique new bingo sensation, you’re missing out!

Up until the EGR awards ceremony, the site had just the one room – 50p, but now there are two more rooms to play in; £1 and £2.50p, which means bigger cash to be won.

The £1 BOB bingo room is accessible between the hours of 6pm and 10pm Monday to Friday. The £2.50p bingo room can be played for two hours on Fridays, between 8pm and 10pm. Head to the bingo lobby on these specific days and the rooms will be visible, but you only have until the 30th of August to play in them.

Prizes available to be won will be determined by the number of players with tickets into the game, but to give you an idea of what to expect, when I visited Saturday morning, the 50p bingo room had 19 players with a prize of £7.51p for the full house. Each game is a 50-ball variant and for 50p, you and everyone else taking part will receive 10 tickets. To win the only prize on offer, you need to mark all 10 numbers off before anyone else.

To win the BOB’s Your Uncle jackpot, you need to win the full house within 16 calls. A Few Extra BOB is a little extra cash awarded on top of your full house prize, if you manage to call house within 20 calls. To help keep track of how many numbers you need, BOB’s hand will count down from five to zero (if you win) by using his fingers. Each game is played automatically, allowing you to enjoy all the usual perks of being a Mecca Bingo player, which includes a vibrant chat community, side games, slots and casino games as well as progressive jackpot offerings, and speaking of which, have you seen how much cash is up for grabs with the Wolf Run slot? You’d be howling mad to miss this one!

What do you make of the new BOB bingo schedule? Let us know below.