Calling All Party Animals! Get in On the Prize-Winning Fun at 888 Ladies Bingo 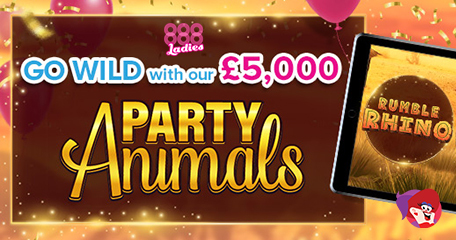 Roomies! There’s a promo going on over at 888 Ladies and its valid through the 10th of July. If you’re lucky, you could win a share of five lovely grand. If you’re a bit of a wild child and love to take a walk on the wild side, you’re cordially invited to swing by the Party Animals promotion.

So, what do you have to do to win? To win a share of £5000 in real cash prizes, you simply need to stake £10 on the slots in the ‘party animals’ tab. Every £10 spent will generate 1 prize draw ticket…

…and the more you have, the more chances you have of winning. There are just two slots casino in this category, which should make it easy; the African safari-themed, Rumble Rhino, and the fantasy-filled Dragons of the North, both of which are PariPlay titles.

On top of any possible slot winnings, you could win one of 40 real cash prizes:

To keep track of your prize draw tickets, simply log in and head to your account, it’s as simple as that.

Dragons of the North is a must for any Game of Thrones fan; a slot which focuses on four extremely terrifying fire-breathing beasts. Featuring 5 reels and 50 win lines, players can head out on an adventure to uncover not one, but four jackpots. There are many bonus features and big wins packed into the reels, but you’ll need to face your demons before being rewarded.

Rumble Rhino is not just your average safari slot; it’s a slot machine which was created in association with the Save the Rhino charity….

“…We believe we can stop poaching and habitat loss so that, in 20 years’ time, rhinos will no longer be Critically Endangered. We’re working with the best people and using every tool we can to save rhinos.” And those who took a spin of the reels in the first weeks of the slots launch, will have been helping to do just that, as a portion of the profit were being sent directly to this very worthy charity.

Packing a punch with a 6-reel, 100-win line engine, the slot takes players to new exciting levels of gameplay, thanks to transforming symbols, giant 4x4 symbols, bonus spins, multipliers and huge pay-outs. Accessible across all devices from £1 and £50 a spin.

You have until the 10th of July to get in on the action at 888 Ladies Bingo. Which will you play?

I love Rumble Rhino. The reels are different to usual slots and it only takes two bonus symbols to trigger the feature.