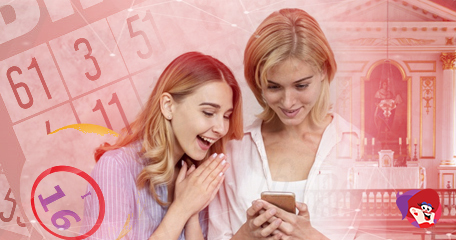 Who’d have thought a game of bingo in a church could hit the headlines, but it has and for two very unlucky players, their numbers weren’t exactly faithful to them. Across the pond in New Jersey, avid churchgoers settled in for a game of bingo, but the game was soon interrupted by cops who turned up to bust two cheaters.

Teresa Davis, 71 and Keasha Brockington, 38, called house and claimed they had the winning ticket for the $200 full house prize, but something was amiss and the church volunteer inspecting the ticket soon sought the guidance of Rev. Joseph Ganiel.

The cheating duo was caught in the act of cheating when it was discovered the ticket in which they claimed had been the winning ticket was in fact a losing ticket, but the pair had formulated a plan to replace certain numbers on the ticket to bag the real money prize and it would turn out not to be the best bingo decision they’ve ever made.

The alleged winning ticket had new numbers taped over the original digits, but this didn’t come as a surprise to the US reverend; “I tell them to look for anything that has tape on it. If it has tape, they should hold it up to the light to see if the same number is on the front and the back.”

The volunteers who check the bingo game tickets had previously been trained to screen tickets and it’s a good job they did. It wasn’t long before the cops were called to the house of God to investigate the un-holy actions of two individuals and the pair soon found themselves charged with improper behaviour under a borough ordinance because after all, bingo rules are rules!

We’re not sure as to what the punishment would or should be for such an act but Ganiel said it’s the first time in two decades there’s been a scandal at the church. The unclaimed prize of $200 is still in possession of the church and we expect it to be awarded at the next game of bingo.

You may be surprised to learn that this isn’t the first time a church has been the subject of bingo thieves. Back in 2010, three men in Queens were clapped in irons after a slew of gambling related charges were handed down to them, and they involved swindling $830K from bingo games affiliated with the Greek Orthodox Archdiocese of America.

The trio of conmen gathered the fortune on side bets on which number would come up next and assured the players and the church that all proceeds from the side bets would benefit the church charities in Queens, although, no such charities existed, and the men pocketed the cash.

How did they ever think they would get away with it! A bingo ticket is either card or paper with no tape, so the tape is always going to be an alarming factor!