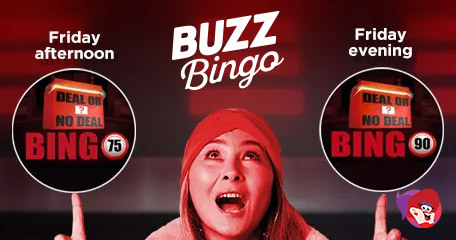 Lift the Lid on Extra Cash in New May Promo

Deal or No Deal (DOND) bingo is without doubt one of the most exciting bingo variants to ever exist, delivering traditional bingo fun with a modern gameshow twist from 2p a ticket. Every full house winner is guaranteed to win two prizes – the stated cash prize for marking all of their numbers on a single ticket plus either cash from the banker or the value of their box.

Everyone in the game will be asked whether they think the winner should take the bankers offer or open their box. At the end, the results of the poll will be shown to help the winner make that all-important decision. Take the bankers cash and it’s game over. Choose to “no deal” and the remaining boxes are opened. The bonus plays out exactly how it would on the television gameshow, only there’s no auditioning required!

Everyone Will Win Cash

How do you make Deal or No Deal bingo more exciting? By ploughing more cash into those boxes and Buzz Bingo is doing just that for one weekend only! Four escalator jackpots must be won on the last Friday and Saturday in May, paying £2,500 to £5,000 in real cash! Escalator jackpots will be split 50/50 – the winner gets half and the other half will be shared between everyone playing in the winning bingo game.

What are escalator bingo jackpots? Just like an escalator, the prizes increase and so do your chances to win as the games go on.

…you have the low values in blue and the high values in red. As numbers are drawn, boxes will be eliminated at random until there are just the two boxes remaining at the point of a full house win. The values from those boxes will have influence on the bankers offer.

I’ve only ever won a full house once in all the years it’s been available to play, and I beat the banker and won £500!