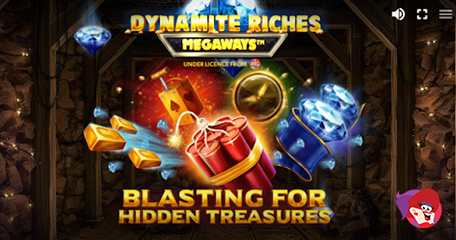 The sequel to Dynamite Riches has landed, and it comes complete with a Megaways reel mechanic with even more ways to win than ever before! Red Tiger Gaming are proud to unveil Dynamite Riches Megaways where a world full of gold and gems wait to be discovered. In similar style to that of the original release, players are invited to dig beneath the bedrock for a chance to immerse themselves in riches beyond their wildest dreams!

Features include blasting away of low paying symbols, lighting of dynamite (wilds), multipliers, raining golden wilds, a mega diamond wild and bonus spins where multiple features can help you hone in on that mega win! Do you think you have what it takes to become a TNT expert? It’s time to put your skills to the test as you aim to unlock a maximum win of 7,000x your stake!

Above the 6x7 reel engine is where you will find four locked barrels, four-barrel loads of modifiers which come into play by landing wild dynamites on the reels. Modifier one is unlocked when 15 wilds have been collected, two at 30 wilds, three at 45 wilds and four at 60 wilds. Those modifiers are as follows:

Then there’s the gold spins, aka the bonus spins round. Three scatters award 8 free games, with each additional scatter increasing those spins by 2. Each win during the feature will increase the multiplier up to 20x. Will you be playing the new Red Tiger Gaming release? You’ll find it over at Play OJO complete with an hourly must drop jackpot, a daily got to go jackpot and the mega jackpot with no upper limit!

The original had a random feature where any of the 4 bonuses could be triggered. Look like this one doesn’t have it, but it has better win ways, so not too bad.

"The claim is a little misleadi..."