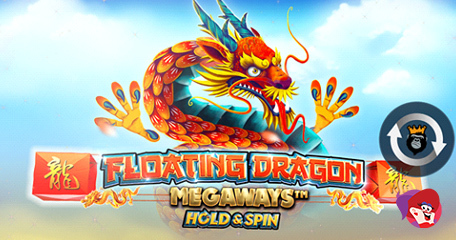 Floating Dragon Megaways: Hold & Spin is set to grace our screens on September 26th, bringing with it up to 236,196 ways to win per spin and a series of cash-packed features. Unlike traditional Megaways slots, this Pragmatic Play sequel boasts a total of 3 extra reel sets, unlocking and locking randomly with every spin.

As we’ve seen with previous Pragmatic Play releases such as Big Bass Bonanza and Big Bass Splash, there are fish symbols with money attached to their backs. The values of these can only be won during the bonus spins round.

Reels 1 and 6 can house up to 6 symbols. The extra reel sets above reels 2, 3, 4 and 5 consists of 3 more rows of symbols and only the very top of those rows offers the wilds. The extra rows will spin independently at every spin and are locked or unlocked randomly. Only symbols from unlocked reels can participate in gameplay. The total number of ways to win is 147,456.

The tumble feature is a cascade where all winning symbols are removed from the reels, delivering additional chances to win from the one spin. The red lantern is a mystery symbol and can appear on any number of reels. All lanterns will be transformed into the same symbol or they can trigger the bonus spins round.

The bonus spins game features multiple multipliers over multiple levels with 10 free games with 1x multiplier granted initially. During those games, should you happen to land four Geisha girl symbols, you’ll re-trigger the feature once the current round has ended, along with a 2x multiplier.

Four more Geisha symbol during level 2 triggers 10 more spins with a 3x multiplier. Level 3 not only offers 10 additional bonus spins but a multiplier of 10x too! Level 4 features a 20x multiplier with no limit to the level one can reach. Multipliers will increase in 10x increments beyond level 4. It’s an increasing prize pot giveaway!

Another feature to keep an eye on during the bonus spins round is the fish collect bonus. Each fish is randomly assigned a multiplier value from 2x to 5000x and can only be won on the presence of those Geisha girl symbols. Multipliers are not only applied to symbol wins but fish wins too.

Now for the hold & spin bonus. The golden coin money symbol is the key to unlocking mega wins and when three or more appear in view, the bonus round is activated. You’ll begin with 3 re-spins. All coin symbols that fall after each re-spin will reset the number of re-spins back to …

…and the value of each coin on screen will be added to the total win of the round. If a shiny diamond should land, a glittering win multiplier of between 50x and 2000x will be awarded. The hold & spin round guarantees a win of at least 20x. If there are no more re-spins remaining and at least 20x your stake has not yet been won, an additional 3 re-spins are granted.

Floating Dragon Megaways: Hold & Spin is expected to be released on September 26th.

That’s a lot of features for just the one slot. Can’t wait to try it out. The original slot in this series always likes to play hard ball with me. I’m yet to get...

That’s a lot of features for just the one slot. Can’t wait to try it out. The original slot in this series always likes to play hard ball with me. I’m yet to get those free games!