From Bingo (Drugs) Haul to Jail for These Dopey Criminals! 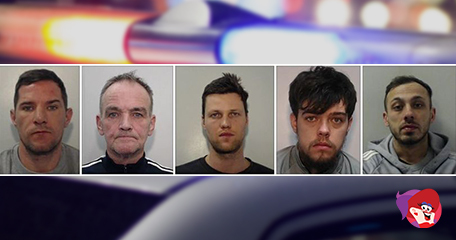 Bingo halls have long been considered entertainment, only for one group of men, the entertainment didn’t involve dabbing bingo tickets or spinning the slot machine reels, it involved growing drugs! Old bingo halls are a favourite among the criminal underworld, especially when it comes to producing cannabis. Bingo halls are known for being spacious – the more space inside, the more chance of an illegal cannabis farm being set up inside.

Do you know how easy it is to find a cannabis farm? Extremely easy! All the police need to do is fly a helicopter over some buildings and the one that is emitting the most heat from the roof is the one growing the drugs! How do they know that? Simple! To grow vast quantities of cannabis requires special heat lamps – the more lamps in use, the more heat escapes through the ceilings! We’ve all seen the police shows on TV, many of which involve circumstances like this, but how this group of 5 criminals got caught was mind-blowing and never been seen on our screens!

This Way to Jail

Eyeing an abandoned bingo hall as a potential money-maker…

…a group of five drug dealers from Manchester clutched at the chance at becoming rich, but playing bingo wasn’t part of the plan! Nor was getting caught! Chadley Smith, a 32-year-old from London joined Peter Rule of Collyhurst, Bradley Rule of Miles Platting and his father Peter Hobson of Oldham, plus Leslie Fowler of Collyhurst in an illegal enterprise of growing cannabis, with a branch in Blackley and in Hyde. Smith, who has been since labelled a ‘dopey criminal’ by Greater Manchester Police (GMP), stupidly led police right to the action, and as a result, all five will spend a lengthy time behind bars!

The plants in the two areas were estimated to be worth £3.75million, which is estimated to be the ‘largest in the Northwest.’ The journey from freedom to jail went a little something like this…Smith reported being assaulted to the police in June 2018. His report also detailed how his van had been stolen. A PCSO followed up on the report was unable to find any stolen property. Many attempts were made to contact Smith, but he failed to respond. The officer tracked down Smith to the last place he was seen – at bingo, and this is where the huge cannabis farm was discovered!

All-in-all, the group of five men were sentenced to 21-years in prison for a stash of £750K found in the bingo building and one of more than 4 times the size of that in a mill in Blackley. The court heard how Smith leaped off the roof after being summoned to ‘come on down’ by officers. Naturally he tried to evade capture but was soon caught.

How stupid! You can’t get away with stuff like this anymore. I watched a show where it had been snowing, there was snow everywhere but one house in England had no...

How stupid! You can’t get away with stuff like this anymore. I watched a show where it had been snowing, there was snow everywhere but one house in England had no snow on the roof at all. It had been melted from the heat lamps used to grow the drugs!