From the Players for the Players: Wink Bingo Payout and Changes to Bonus Funds 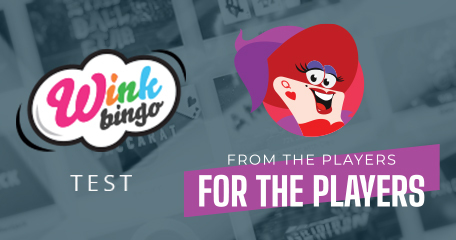 Wink Bingo, a household name in online bingo, have appeared on our screens ever since launching back in 2008. A string of successful television ad campaigns landed them a spot in the top-tier bingo brands list with community-focused promotions, plenty of free bingo rooms and a virtual bingo shop packed full of play-time rewards. But did they live up to expectations when we put them to the test?

We’ve been putting brands under the microscope in our exclusive From the Players for the Players project, something no other review website has done before. By putting our money where our mouth is, we have discovered some information, vital information at times, that we hope will help players when it comes to deciding on whether to play or not. How did Wink Bingo do? Stick with us to find out!

UWinkIBlink registered at Wink Bingo 11-years ago, but in that time, she found more favourable places to play, those with quicker withdrawals to be precise. On Tuesday 14th September, she attempted to sign in with her email address and last known password. A message on screen suggested she was already registered, suggesting her password was wrong along with a link to reset it. After 2-hours of waiting for an email to change her log-in details, she decided to contact support. Having waiting hours already, she opted for the freephone telephone option for a quicker response.

The telephone assistant started off by asking which bingo site she was having issues with. Our tester thought this question was strange because she dialled the number off the Wink Bingo customer support page. The confirmation was likely required due to the call centre managing multiple 888/Dragonfish brands. Explaining her difficulties, the call handler provided some insight into why she could neither log in nor request a new password…her account had been deactivated. Two options were put to her: first being to re-register with a different email address or email responsible gambling HQ at Wink Bingo to reinstate the account.

After weighing up the pros and cons, UWinkIBlink decided to re-register. This could have resulted in her account being flagged as a duplicate account, closed and winnings confiscated, so it was a big risk, but “if support suggested it, it should be okay” she thought. Before signing up again, she sent an email off to the email address supplied by the telephone support agent, who advised she should receive a reply within 3 business days (Friday 17th). We’re told, as of Tuesday 21st, 5 working days later, no reply has been received to that email.

Hoping to use PayPal for a quicker turn around with withdrawals, UWinkIBlink headed straight for this option in the cashier, only to be met with the following message:

As discovered in our test of Pink Ribbon Bingo, Internet Explorer in Windows 10 is not classified as a ‘modern browser’. Microsoft Edge is the alternative.

Unaware and after a few failed attempts, the reviewer opted for Visa Debit, knowing it would take longer to process her withdrawal. Adding her card, she deposited £150 on Tuesday 14th September and declined the welcome offer by ticking the box, to eliminate any wagering requirements. 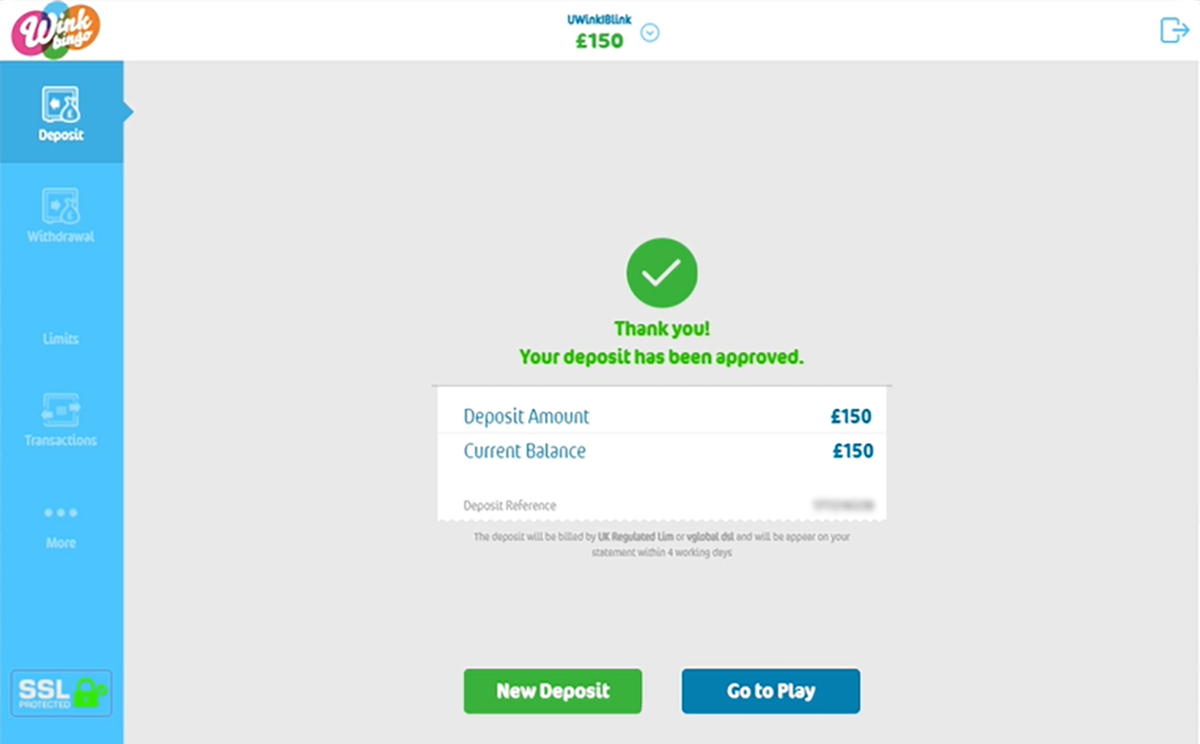 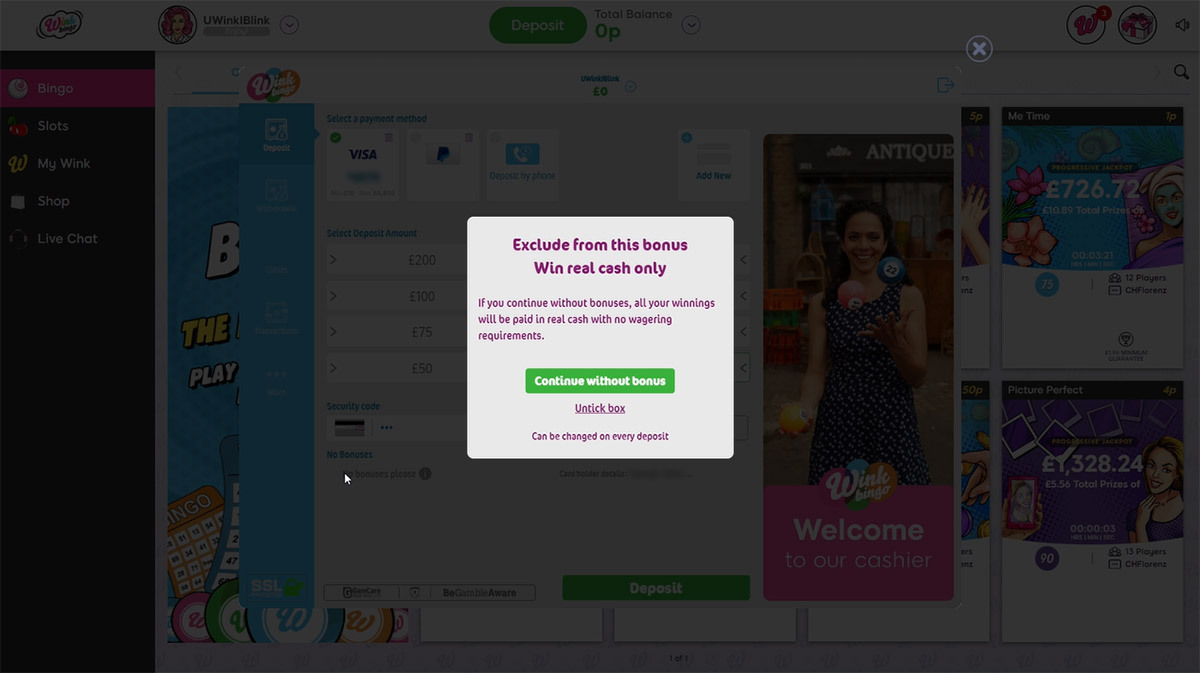 The selection of bingo rooms was vast, with traditional bingo games featuring three prizes per game, 75-ball bingo, coverall and plenty of freebies. The only downside to the rooms were the number of players, which meant less prize money and often, the ticket price was more than the prize itself. The only way to boost her chances of winning more than maximum tickets stake price was to play in the Mystery Jackpots room, where prizes up to £500 can be won for 5p a ticket!

Side games were available to play alongside bingo with titles ranging from Eyecon’s Fluffy Favourites to PariPlay’s Wolf Riches. Landing a moon on any of the five reels will trigger the bonus above it, which could include an instant cash prize, free games or even one of four pre-set jackpots!

After beating 30:1 odds to win the mystery jackpot full house prize of £88, UWinkIBlink decided to cash out her remaining balance. 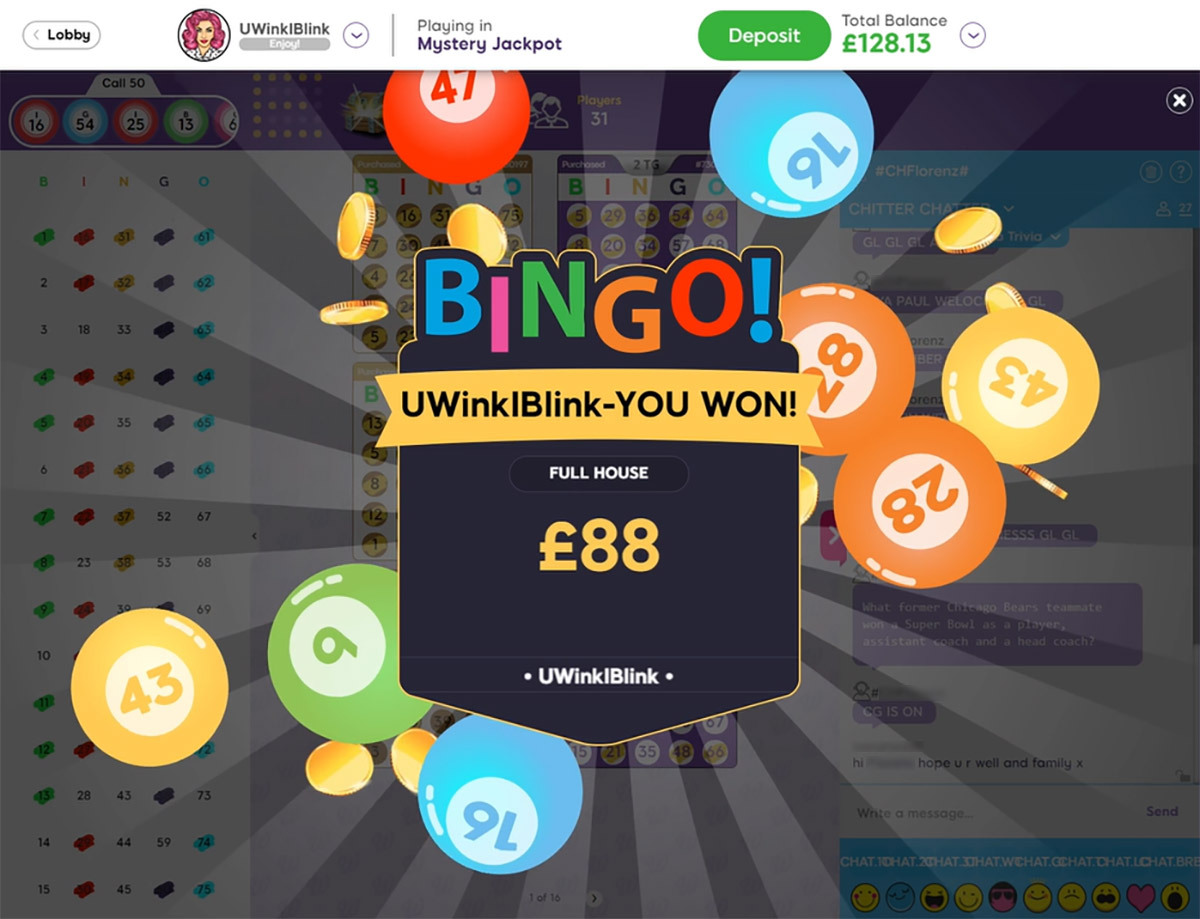 With £200.69p in her withdrawable balance, our reviewer headed to the cashier to cash out. Knowing she hadn’t completed KYC, she wanted to see whether this would have any impact on her withdrawal. Remember, she could have also seen her winnings confiscated and her account closed, so what happened? On Tuesday 14th September, she requested £200.69p be sent back to her deposit method – Visa Debit. On Friday 17th, she received an email saying the request had been processed and her funds would be received within 4 – 7 business days. Our tester of the day didn’t have to wait that long, as the funds were in her account as soon as the email was sent!

How Does Wink Bingo Stack Up?

One of the major drawbacks this tester witnessed was players not being able to use their welcome bonus funds in any of the bingo rooms. Although our reviewer declined the welcome offer, she observed one user seeking answers in the bingo chat section. The player asked which room the welcome bonus could be used in, and she was told she couldn’t use it at all!

Unfortunately, players are still being met with restrictions when it comes to bonus funds, and it’s not going to get better any time soon. On Tuesday 21st September, UWinkIBlink went back to verify if the issue with bonus funds was resolved. She logged in and after three attempts at getting the chat hosts attention in an empty room, she was offered an explanation into the bonus funds issue…only it’s not a maintenance issue as previously stated, but a clamp-down on where bingo bonuses can be spent. New and existing players were once able to use bonuses to play most bingo games, but this has now been reduced to a once-a-day room, the Daily Jackpot Game.

Aside from the empty (ish) bingo rooms, the restrictions on where bingo bonuses can now be used and the lack of customer support via email, Wink Bingo offers a huge selection of gaming products and relatively fast withdrawals. Having had to re-register, our tester faced no issues when it came to cashing out, and this was despite deliberately not adding KYC documents.

This information concludes this extensive test as part of the project From the Players, For the Players. If you are a member of Wink Bingo or consider making a deposit, we hope this report provided some useful information.

I wouldn't re-register personally and it seems strange to me that this was offered as an option by the Customer Support team, that there was no solution for this...

I wouldn't re-register personally and it seems strange to me that this was offered as an option by the Customer Support team, that there was no solution for this issue to be solved. Having multiple accounts leads to the potential issues, but I am glad that the pay out was processed promptly.

Good to hear there was no problem with withdrawing funds, considering the KYC issue. But what's with all the bonus restrictions? I hope they will sort that out soon......

Good to hear there was no problem with withdrawing funds, considering the KYC issue. But what's with all the bonus restrictions? I hope they will sort that out soon... Thanks for the detailed report! :)